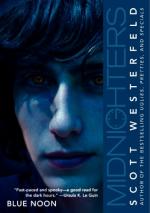 Scott Westerfeld
This Study Guide consists of approximately 32 pages of chapter summaries, quotes, character analysis, themes, and more - everything you need to sharpen your knowledge of Midnighters #3.

Midnighters 3: Blue Noon is the third book in the Midnighters series. It is preceded by The Secret Hour and Touching Darkness. The series was completed in 2007. The books are designed for teenagers, grades 6 and up. The series follows the science fiction lives of five teens as they battle a secret world of dark creatures.

Scott Westerfeld, the author, has filled Bixby, Oklahoma with five very believable and relatable, distinct main characters. To match, he's given readers a dark, intense story that moves and jumps at a fast pace. The plot is enthralling and the sinister plots keep the story enjoyable in a dark way.

A midnighter is a person born within seconds of midnight. These indivduals are able to live within the blue time, an extra hour that occurs at midnight while the rest of the world is frozen. It is first implied that the blue time only occurs in Bixby, Oklahoma because of its map position but as the series unfolds, the blue time spreads to many surrounding areas. As well as the ability to be awake during the blue time, each midnighter has extra abilities such as acrobatics, mind reading, and carrying flame during the blue time. In addition to these abilities, the midnighters are sensitive to bright light. The book explains many of the characters as being "Goth" in dark clothing and wearing shaded glasses, even while inside buildings.

The current generation of midnighters is considered orphaned. There used to be a larger group of them who were destroyed several decades ago by the Grayfoots. Rex has the ability to read about this history in the lore, a book of notes made by previous midnighters. The orphaned group knows of only one ancient midnighter, Madeleine, a mindcaster who shares the history of midnighters with Melissa who also has the ability to mindcast. Jessica is the newest midnighter to the group and has the flame bringing ability. It is implied that this power is what the darklings are after and that the events of Samhain are plotted specifically to destroy the flame bringer. The five orphaned midnighters are friendly but not the best of friends. They do not always work well together and there is quite a bit of personal conflict between them.

The third part of the trilogy, Blue Noon tells the story of what happens when time freezes in the middle of the day during a school pep rally. The book is all about the task of trying to keep the secret time in the secret hour. The midnighters begin to experience the secret hour more and more frequently during daylight hours. In addition to that, Rex's darkling side begins to make more appearances and Rex is unable to control himself at times. He is becoming stronger every day. By using Madeline and other resources, the midnighters discover that the secret hour will extend to last a full 25 hours. They determine this will take place at midnight on Samhain, the ancient Halloween. They learn of a rip in the blue time that is sucking up daylighters. This rip expands like the seam in fabric. Jessica has ongoing trouble with her younger sister Beth who is curious about Jessica's secretive lifestyle.

Ordinarily there would not be a problem with society knowing of this secret hour but the blue time is full of nightmarish creatures called darklings and slithers. These creatures plan to use the extended blue time and rip to feast on the humans in town. Jessica and her boyfriend Jonathan stop the rip from spreading to the whole world but as a sacrifice. To do this Jessica brought to life a frozen lightning bolt and unfortunately gets sucked into the blue time. Jessica's parents become very sad about their daughter's "disappearance" and are still grieving about her loss when Beth comes to visit Jessica for the last time. Both sisters share an emotional few last words. Finally, with only a few more minutes to spare, Jonathan flies Jessica and Beth on their last flight through the blue time.