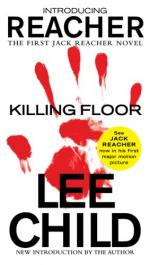 Lee Child
This Study Guide consists of approximately 66 pages of chapter summaries, quotes, character analysis, themes, and more - everything you need to sharpen your knowledge of Killing Floor.

This detailed literature summary also contains Topics for Discussion and a Free Quiz on Killing Floor by Lee Child.

Killing Floor by Lee Child is about a man named Jack Reacher who comes to the little town of Margrave looking for information about the mysterious death of a guitar player named Blind Blake. Instead, he finds one of the largest counterfeiting operations in history. His desire for anonymity is challenged before he can finish breakfast on his first morning in Margrave, as he is finds himself being taken to the police station for questioning on a murder. The Chief of Police has already decided Jack is guilty. Since it is Friday, while Jack's alibi is being checked, he finds himself a guest of the state run facility in Warburton with another detainee named Paul Hubble. Though merely held for questioning, they are caged on the third floor with the hard-core lifers. Jack's military background comes in handy as he finds himself defending the less aggressive banker against the caliber of men there. Earning his trust in the process, Jack learns that Hubble fears for his life and for his family's lives. He is so fearful that he won't say much more, so Jack is unable to do much for him and all he really wants to do is escape this town now and return to anonymity. Then he finds out the murder victim is his brother Joe and everything changes.

Jack can't leave Margrave until he knows who killed his brother, and why. When Chief Morrison swears Jack was at the scene of the murder, Jack knows the Chief is involved. He isn't sure who to trust, but then he discovers that Chief of Detectives Finlay has only been with the Margrave Department for six months so Jack feels him out. He also starts to trust an officer named Roscoe who gets him coffee on the first day, and treats him as though she knows he is innocent from the start. Both seem honest, but Morrison outranks them, so their investigation has to be careful. Together, what they uncover is nothing short of astounding. In a plan that almost defies attempts to uncover it, ten people collect hundreds of thousands of dollars in single dollar bills and send them out of the country where they are bleached and reprinted as hundreds and thousands of one hundred dollar bills instead. They have until the following Sunday before the millions in singles is shipped out. In that week, Jack falls in love with Roscoe, uncovers the largest counterfeiting operation in history, solves the murders of his brother and several others, cleans up a corrupt Margrave Police Department, rescues kidnapped victims that include Hubble's family and Roscoe and in the process destroyed the police station, the fire house and burned four warehouses to the ground. A fast-paced story that keeps the reader guessing until the end in which Lee Child successfully weaves intrigue, romance, counterfeiting and murder in a winning combination.

More summaries and resources for teaching or studying Killing Floor.