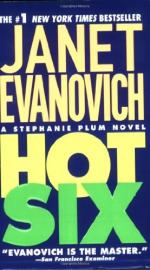 Janet Evanovich
This Study Guide consists of approximately 50 pages of chapter summaries, quotes, character analysis, themes, and more - everything you need to sharpen your knowledge of Hot Six.

Stephanie Plum is a bond enforcement agent that almost always gets her man. Even if by accident. The bumbling bounty hunter finds herself in the middle of a police investigation, mob entanglements, two enticing men, and a grandmother reliving her youth. Stephanie manages to catch the bad guys and solve the mystery through no fault of her own.

Stephanie Plum works for her cousin Vinnie, owner of Vincent Plum Bail Bonds. She spends her days tracking people who have skipped their court date, otherwise known as skips. Though Stephanie is not the best at what she does, and will freely admit this, she is reliable, and usually manages to retrieve those for whom she is looking without too much trouble. When Ranger, another bounty hunter, is one of those that Stephanie is required to find, Stephanie balks, knowing that Ranger will not be found unless he wants to be. While working at collecting the other skips that Vinnie has assigned her, Stephanie is contracted by Ranger to keep an eye on the Ramos family. Ranger is the last person that had seen Homer Ramos alive and is now trying to piece together the situation before he winds up dead. Stephanie watches the Ramos family, becoming entangled in the Ramos family business more than she had intended. Stephanie is also being followed by two men hired by Arturo Stolle, the carpet king, who hope that she will lead them to Ranger. In addition, Stephanie's sex life is put on hold when her Grandma Mazur moves into her apartment.

Stephanie spends her time hunting people that have failed to appear in court, and avoiding these two men, as well as investigating the Ramos family on her own. Stephanie retrieves one fugitive and gets into a battle of the wits with another, all the while becoming more entrenched in the Ramos family issues with Ranger. Watching the home of Hannibal Ramos, Stephanie notices that someone seems to be living there, even though Hannibal has been staying with his father in Deal. Stephanie keeps an eye on the house while dealing with Morris Munson, an elusive skip who has decided to kill her in order to convince the courts he is insane. She and Lula finally do apprehend Munson, and the two of them decide they should investigate Hannibal's townhouse. The home is empty, but there are signs of someone having been there. Stephanie and Lula also run into Cynthia Lotte, Homer Ramos' former girlfriend, who is looking for her belongings. Stephanie and Lula assist Lotte in removing a body from her car before she leaves. Stephanie alerts Morelli to the body at the townhouse, once again raising the ire of her sometimes boyfriend. Ranger is also concerned with Stephanie's snooping, even suggesting that he lock her up to keep her safe. Stephanie becomes understandably angry; as a grown woman she can take care of herself. Mitchell and Habib, Stolle's henchmen go so far as to kidnap Stephanie in order to get Ranger out in the open, but Stephanie manages to escape. Stephanie begins to realize there is much more to the story than meets the eye, even questioning if Ranger might be more deeply entrenched with the Ramos family than she had thought possible.

Throughout it all, Stephanie still manages to catch the FTA's that have skipped their court dates, keep an eye on her wayward grandmother and stop in for dinner with the family. When Homer Ramos shows up at her apartment, the story becomes clear at last. Ramos had been acting on his own, dealing in drugs and stolen property. By doing so he had upset the balance between the different criminal organizations in New Jersey. Ranger had been acting as a go between for some of these organizations.

When Homer's life had been threatened, he and his family had decided to fake his death and slip him out of the country. Before doing so, Homer Ramos had scammed Arturo Stolle one last time, taking the money he owed him and providing Ranger with old newspaper in a locked bag instead. Because of this, Ranger was wanted by Stolle, and Stephanie had been drawn into the situation. Stephanie is nearly killed before Ranger is able to save her, and Homer is finally apprehended. Grandma moves back to Plum's parent's house and Stephanie is finally able to reestablish her relationship with Morelli.

More summaries and resources for teaching or studying Hot Six.

Hot Six from Gale. ©2005-2006 Thomson Gale, a part of the Thomson Corporation. All rights reserved.