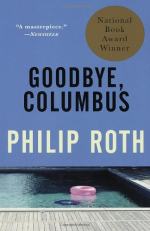 Philip Roth
This Study Guide consists of approximately 74 pages of chapter summaries, quotes, character analysis, themes, and more - everything you need to sharpen your knowledge of Goodbye, Columbus.

Portnoy's Complaint (1969) is Roth's third novel, and is his most famous, most popular, and most controversial. This novel is a stream-of-consciousness narrative by the protagonist, a young Jewish man, speaking to his psychoanalyst, who says nothing.

Goodbye, Columbus and Five Short Stories (1959) is Roth's first published collection, which won him the 1959 Book Critics Award. It includes the novella "Goodbye, Columbus" and the short stories "The Conversion of the Jews," "Epstein," "Defender of the Faith," "You Can't Tell a Man by the Song he Sings," and "Eli, the Fanatic."