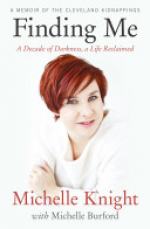 Michelle Knight
This Study Guide consists of approximately 42 pages of chapter summaries, quotes, character analysis, themes, and more - everything you need to sharpen your knowledge of Finding Me.

Finding Me Summary & Study Guide includes comprehensive information and analysis to help you understand the book. This study guide contains the following sections:

This detailed literature summary also contains Topics for Discussion on Finding Me by Michelle Knight.

“Finding Me – A Decade of Darkness, a Life Reclaimed” is the story of Michelle Knight’s abduction and confinement by Ariel Castro. Her story and that of her fellow abductees, Amanda Berry and Gina DeJesus, became international news when they were rescued in 2013. Michelle incredibly had been confined in Castro’s filthy and rundown house for eleven years. The other two girls were there for ten of those years.

Michelle Knight was born into a dysfunctional family. She was the elder sister of twin boys. She was close to her brothers and a young cousin who lived with the family. She was given adult responsibility at a young age being forced to care for the younger children which often caused her to miss school. Due to her absence at school and perhaps some learning disabilities, Michelle fell far behind in school and hated it. She was ridiculed for her small stature – as an adult she only measure 4’7” – and for her failing grades.

Michelle’s home life became increasingly toxic as she matured. The house will filled with a parade of relatives who were in and out of her life. There was one male relative who she did not name who sexually abused her for years. Her father left the family and her mother abandoned her emotionally. As a result of her horrid home life and unsatisfying school experience, Michelle ran away from home as a young teenager. She was homeless for a while and slept under a bridge and became a drug runner for a while to earn some money.

After a close call with the law, Michelle was returned home where the sexual abuse resumed. She was re-enrolled in school, and at age sixteen she was placed in the seventh grade. Life was no more satisfying than it had been. She had a baby, Joey, at nineteen. She loved her child and he became her whole life. She was determined to be a better parent that her mother. However, an altercation with her mother’s drunken boyfriend led to Michelle losing custody of Joey. On the day that she was abducted by Ariel Castro, she was on her way to a social services hearing in an attempt to regain custody of her child.

For the next eleven years, Michelle rarely saw the light of day again. She spent ninety percent of her time in chains and the other ten percent being raped by her captor. A year after her confinement, Castro kidnapped two other girls and the three of them suffered together for ten more years before they were rescued.

The story ends with the good news that Michelle is on the road to recovery. However, nothing will erase the eleven years of her life that was stolen from her. And nothing will completely heal the scars from the physical and sexual abuse that she suffered from during her long, nightmarish ordeal.

More summaries and resources for teaching or studying Finding Me.

Finding Me from BookRags. (c)2022 BookRags, Inc. All rights reserved.