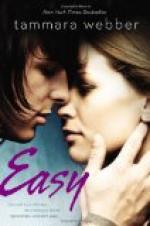 Tammara Webber
This Study Guide consists of approximately 64 pages of chapter summaries, quotes, character analysis, themes, and more - everything you need to sharpen your knowledge of Easy.

"Easy" by Tammara Webber is an intriguing book about two college students finding love against the odds brought on by their individual trust issues. After Jacqueline's boyfriend of three years dumps her, she is shocked to find herself attracted to Lucas, a "bad boy" who rescues her from an attempted rape. Since she is also drawn to Landon, her Economics tutor who helps her avoid failing the class, Jacqueline must decide who to trust as secrets about each guy comes to her attention. "Easy" is an extremely entertaining and enjoyable novel that demonstrates that people are not always what they seem, in both good and bad ways.

Two weeks after Kennedy, her boyfriend of three years, dumps her, Jacqueline leaves a Halloween party at Kennedy's frat house and is attacked by Buck, one of Kennedy's fraternity brothers. Luckily, she is rescued by an attractive stranger she has never noticed who seems to know who she is. Jacqueline wants to forget about the event, but she keeps running into her mysterious savior, Lucas. Since Jacqueline missed Economics class for two weeks, she is failing the course, but Dr. Heller decides to give her a second chance, setting her up with his tutor, Landon Maxfield, with whom she begins a flirtatious online tutoring.

Jacqueline and Lucas flirt, and they begin dating very casually. After Jacqueline escapes from Buck when he tries to rape her in the stairwell of her dorm building, Buck spreads the rumor that they are sleeping together. When Jacqueline finally tells Erin, her roommate and best friend, about Buck's attacks, Erin insists on them taking a self-defense class where Jacqueline is shocked to find that Lucas is one of the instructors. Jacqueline is also surprised when one of her classmates informs her that Lucas is the class tutor, but she continues dating him without mentioning his secret. Kennedy tells Jacqueline that he misses her, but she no longer has feelings for him, so she refuses to reconcile.

When Dr. Heller catches Jacqueline leaving Lucas' apartment, Lucas ends the relationship since it is against school policy and could jeopardize her grade, but he takes full responsibility and makes sure that Dr. Heller knows that Jacqueline was unaware that the guy she was dating was her tutor since she and Landon had a relationship solely online. The day after Jacqueline tells Kennedy about Buck's attacks at the Brotherhood Bash, Jacqueline learns that Buck raped another girl, Mindi, after the party. She turns to Lucas for help with filing the police report, and when she confesses that she misses him, they make out and he tells her a little bit about his past. Kennedy begs Jacqueline to forgive him, and though she does, she refuses to resume their relationship.

As the semester draws to a close, Lucas makes it obvious that he does not plan to continue his relationship with Jacqueline because he does not know if he can tell her about some of the secrets in his past. Unwilling to let him go, Jacqueline researches Lucas online and learns about his mother's murder and how Lucas was restrained in his bedroom and unable to save her. Jacqueline feels guilty about how she acquires this information, but when she confesses her knowledge to Lucas and tells him that she also talked to Dr. Heller, he is furious and tells her to leave. Outside Lucas' apartment, Buck attacks Jacqueline in her truck. She escapes, and when he catches her in the driveway, Lucas appears to save her again. Once Buck is arrested, Lucas admits that he was coming after Jacqueline because he knew he made a mistake. Jacqueline apologizes for prying into Lucas' business, but she insists that he needs to stop blaming himself for his inability to save his mother because he was just a child when it happened. Six months later, at Lucas' graduation party, Jacqueline worries about being so far away from Lucas when she transfers to Oberlin in the fall. She is ecstatic when Lucas informs her that he accepted a job in Cleveland which is only thirty minutes from Oberlin, especially when he assures her that deciding to be with her was an incredibly easy decision.

More summaries and resources for teaching or studying Easy.

Easy from Gale. ©2005-2006 Thomson Gale, a part of the Thomson Corporation. All rights reserved.