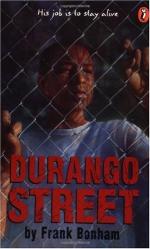 Frank Bonham
This Study Guide consists of approximately 28 pages of chapter summaries, quotes, character analysis, themes, and more - everything you need to sharpen your knowledge of Durango Street.

Durango Street tells the story of Rufus Henry, who at the beginning of the story is being released from Pine Valley, a juvenile detention center where he was sent after being found guilty of Grand Theft Auto. He returns home to find out that his mother has moved to the Durango Housing Project with his brother and sister.

His first day home Rufus goes out that night to get milk and treats for his brother and sister. He takes his sister along and they are confronted by a gang called the Gassers. They leave Rufus and his sister but later the pair is questioned by the police and Rufus’ sister Janet tells them everything. The police then catch the Gassers, who know that Rufus and Janet led the police to them. The Gassers chase down Rufus, who threatens the leader Simon Jones with a broken bottle and the Gassers stand down. Rufus knows he has created a powerful enemy and he needs to join another gang for protection. Even though it is a violation of his parole he seeks out a gang called the Moors. A friend of his from Pine Valley was a member so Rufus hopes he could get in. After meeting with them Rufus is voted into the gang, though he has to be beaten in order to join. The fight is broken up by the police who haul everyone into jail, and the leader Bantu is held on drug charges.

It is at this time Alex Robbins gets involved with the Moors in order to break up the gang and give them a chance at a real life. He approaches the gang about meeting with them and with Bantu in jail, Rufus takes point. He agrees to meet with Alex in the hope that he can get them out of trouble with police so that he doesn’t have to return to Pine Valley.

At the meeting with Alex, the gang agrees to elect a president, Leeroy, who will run their meetings. Alex tells the gang he will be available to help with their problems and he may even get the gang to visit with the Marauders football team. This is a big deal for Rufus because Ernie Brown is a player for the Marauders and Rufus believes Ernie Brown is his father. Rufus even made a huge scrapbook dedicated to Ernie Brown.

Bantu is released from prison and is furious to learn about the new president. Rufus stops him from beating up Leeroy and the pair decides to settle things once and for all. Rufus wins the fight against Bantu and becomes the new leader of the Moors. Rufus decides he will use his new position to toughen up the Moors and make them into a true fighting gang with a firm control over their territory.

Rufus knows if they are going to fight then they are going to need an alibi for the police. He decides to visit the other gangs in their immediate area, the Bloods and the Aztecs, and offer a treaty. If they alibi each other to the police they can continue to fight and defend their territory without being charged by the police. Both of the gangs refuse Rufus’ proposal.

When Rufus returns home he learns the Gassers attacked his little sister. He meets up with the Moors and decides it is time to get back at them. The gang plans an elaborate attack that ends with the Gassers being beaten and running away. Rufus destroys the car Simon left behind. In the morning they are all questioned by the police but the Bloods give all of the Moors an alibi so they cannot be charged.

Alex learns the Gassers have gotten a gun and he knows he has to act fast to prevent further violence. He decides to take both gangs to meet with the Marauders. At the football field Rufus finally gets to meet Ernie Brown and both gangs play on the field. However, Simon tells Ernie about Rufus’ scrapbook and the boys try to fight. To help prevent violence, Ernie and Alex decide to start up a football league for the boys.

When everyone meets to discuss the league, Simon shows Ernie Brown Rufus’ scrapbook on which Rufus has written he is Ernie’s son. Rufus knows he has to get back at the Gassers but the only way to do that would be to get the Gassers on their own territory again. He decides to throw a huge formal dance for the kids in the area and makes sure the Gassers know.

Rufus plans on the Gassers crashing the party and he hires special guards to help maintain order at the party and Alex uses his connections with the police to ensure extra protection. The Gassers do show up and attempt to sabotage the party. Rufus and the Moors remain calm even when it becomes apparent the Gassers were trying to burn down the building. The fire department is called and the Gassers are blocked from escaping by the police. All of them are arrested and the party continues.

A few days later Alex visits Rufus’ mom and tells her about how well the boys acted at the dance and how they had made 26 dollars. Rufus’ mother asks about sending Rufus back to school and Rufus reminds Alex of why he was expelled in the first place. Alex tells Rufus that there will be problems but nothing worthwhile is easy.