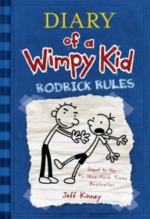 This detailed literature summary also contains Quotes and a Free Quiz on Diary of a Wimpy Kid: Rodrick Rules by Jeff Kinney.

Diary of a Wimpy Kid: Roderick Rules by Jeff Kinney is the second book in the series and begins with Greg writing in his new journal. School is getting ready to start back for the year and Greg writes about how his summer has gone. He joined the swim team and enjoyed his summer break, with one exception. And only Rodrick knows that secret.

Now that school is about to start, Greg suddenly recalls with dread that at the end of school last year he had gotten the "cheese touch." He calms when he realizes that he passed the "cheese touch" on to Jeremy Pindle. Rowley went to South America for the summer so they did not spend any time together, which makes Greg sad. The only person he had to hang out with was Roderick and that didn't go so well.

During the summer, Greg's mother tried to get Greg and Rodrick to "bond" but Rodrick was too fond of shoving and pushing. But, Greg shares, Rodrick got away with it because of "the secret." Maybe if Greg were to find out some good dirt on Roderick, he'd be able to neutralize Rodrick's hold over him.

Greg's father took the summer to work on a Civil War replica in the laundry/furnace room and declared the entire space off limits to kids. Rowley returned from South America and was eager to tell Greg all about it. Greg didn't seem to hear what Rowley was saying and interrupted his friend to talk about his own life. Rowley left. That summed up his summer, Greg writes in his journal. School starts and Greg is assigned a pen pal in his French class.

Greg's father, Frank, takes Greg to the mall on Saturdays to escape Manny (the youngest) and diaper duty. Greg isn't too fond of Manny either since Manny broke one of Greg's gaming consoles. On the bright side, Greg states, he received his first actual letter from Mamadou Montpierre, his new French pen pal. Greg is disgusted and amazed by his brother Rodrick's ability to will his parents to do his bidding. Despite Susan (Greg's mother) demanding that Rodrick type his own research paper, later that night Greg sees Frank typing it for him.

Chirag Gupta is a boy in Greg's class. Greg likes him and decides to pull a welcome back to school prank on him. Greg ends up getting the entire classroom in on it, but Chirag doesn't take it well. He goes to the principal to complain, but the principal can't understand Chirag's English and gets the name wrong. Chirag tells his father and when Chirag comes to Rowley's birthday party, Mr. Gupta (Chirag's father) tells Susan about it. Greg is made to apologize. Chirag and Greg reconcile and renew their friendship.

Susan starts a program that she calls Mom Bucks. Her sons can do various jobs and tasks and earn "Mom Bucks" which will allow them to have money for purchasing miscellaneous items. Career day comes to the school and Greg watches in horror as Rowley talks to someone about nursing school. Since Rowley received a diary for his birthday, Greg is determined to read it to find out why Rowley would want to be a nurse. His plans are foiled, however, when he sees that Rowley's diary has a key.

Cashing in his Mom Bucks, he purchases a diary that is identical to Rowley's so that he can open his friend's diary. When he does he doesn't see anything out of the ordinary. He feels that he has wasted his money. That next weekend, Greg's mother and father go away for some alone time, and they leave Manny with Greg's grandparents. Rodrick makes sure his parents are gone, and then he calls his friends and invites them over for a party. Greg vows silence if he can come to the party. Rodrick agrees, but the night of the party, he locks Greg in the basement. However, since Rodrick has "the secret" on Greg he manages to blackmail him into helping him clean up the house before their parents come home.

Frank, their father, notices that something is wrong with the bathroom door, but can't figure out what. The lock that used to be on it is missing. Greg and Rodrick switched the door with one in the basement after Rodrick's party because one of the party-goers had drawn inappropriate pictures on it. Greg decides that this is the "dirt" he has been waiting for and threatening to tell their parents about it will make Rodrick drop his blackmail treatment.

Greg receives a letter from his pen pal, but it irritates him because writing letters is so old school. He doesn't know why the teachers won't let them email each other. It'd be so much easier. Susan, meanwhile, is determined to make her two older sons bond with one another. She learns that some of the kids are into a role playing game called Magick and Monsters. She buys some cheat books for the boys to learn to play better. Unfortunately, Rodrick seizes on the opportunity to annihilate Greg's characters, then shows no mercy when they play their games. Greg believes that his mother's quest to promote sibling bonding is a waste of time.

The school notifies Greg's family that the music education program has been cancelled. Susan arranges for Rodrick to give both Rowley and Greg drum lessons in exchange for some Mom Bucks. It does not go well and Rodrick uses the opportunity to make both Greg and Rowley feel like idiots. In the meanwhile, over at Rowley's house, Greg finds the same fake money that his mother uses for her Mom Bucks. He asks Rowley if he can have it, then takes the money home and stashes it away in his room.

Greg finds himself short on time to write a paper for his History class. Rodrick tells him that he has an old paper that he will sell Greg in exchange for some Mom Bucks. He agrees and takes the paper, but it is completely on the wrong topic and he gets an F. Meanwhile, Rodrick tries to use the Mom Bucks that he's gotten from Greg, but Susan suspects something. She knows that Rodrick hasn't done anything to have earned all of those Mom Bucks. She suspends the program summarily.

In December, Susan asks Frank to go down to the corner to pick up the pictures that she'd dropped off to be developed from Thanksgiving, but the pictures that Frank returns with are pictures from Rodrick's party. They punish both Rodrick and Greg, whom they assume was also in on it. Their parents no longer trust them to stay alone at the house, so when Susan and Frank have to both leave the house, they take the boys over to their Grandfather's apartment.

Meanwhile, the school announces a Winter Talent Show and Rowley and Greg think that they will do something for that as a way of becoming popular. Frank ends the boys' punishment early as the drum practice is driving him crazy. Rowley stays the night at Greg's house and Greg ends up hurting Rowley on accident. Manny witnesses it and tells his mother. She makes Greg agree to be Rowley's assistant for his magic act for the talent show. They try out for the show, but don't make it. Roderick's science fair project is finally completed and Roderick goes back to practicing with his band.

Rodrick's science teacher, however, calls Susan and Frank and tells them that Rodrick's project didn't meet the standards and that he'll have to resubmit. Roderick's parents make him stop practicing with his band and focus on his science fair project. Rodrick defies his parents claiming that when his band wins they are going to go for a record contract and then they will be dropping out of school to go on tour. Susan and Frank start to argue but see that it is a losing battle. Susan agrees to film Rodrick on stage during the talent show. The film doesn't turn out well and is unusable, mainly because Susan starts dancing and it is captured on film by the school's official photographer. Greg is embarrassed twice.

Rodrick is furious and blames Greg for not shooting the film. He decides that it is time to unveil Greg's summertime secret to the general public. Greg shares what the big secret is. During the summer, Greg had accidentally walked into the women's bathroom when they had been visiting their grandfather at Leisure Towers apartments. He had tried to leave quickly, but had become trapped in a stall waiting for the women who had come in, to leave. Meanwhile, Rodrick has gone to work and before the day is out, Greg's story is out. Devastated, Greg asks his mother if he can be transferred to another school.

To Greg's surprise all of the students at school view Greg as a hero. Greg is confused and gets to the bottom of it. Apparently the story that Rodrick told was passed around so much that it changed. Instead of old women in the retirement apartments, the story has been changed to the story that Greg managed to get into the girl's locker room at Crossland high school. He is instantly popular...at least with the boys.

Meanwhile, Rodrick's day is made when his band gets noticed because of his mother's antics on camera. The video goes viral and is called "Dancing Mom" on the internet. Rodrick develops a reputation as being the drummer from the "Dancing Mom" video. Even though it does get Rodrick noticed, and his band, he is still extremely embarrassed. Greg finds himself feeling actually sorry for Rodrick. Later, the family receives word that if Rodrick doesn't turn in a real science project that he will fail for the year. Greg tells Rodrick that he will help him and the two brothers honestly work together to get it done. Rodrick tells Greg that he's glad that he's his brother.