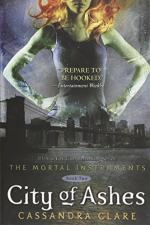 This detailed literature summary also contains Topics for Discussion on City of Ashes by Cassandra Clare.

Clary is a teenager who has led a typical life until she discovers she was born into a group of people known as "shadowhunters" who deals with the demons and monsters, keeping humans safe and monsters under control. When she makes this discovery, she also finds out that her father is a violent rogue who is gathering specific items with the intention of creating a demon army and going to war with the shadowhunters. Clary didn't know any of these things because her mother had hidden her ability to see the demons throughout Clary's childhood. Now Clary's mother is in a self-induced coma and she is dealing with the new situation with the help of her friends and some fellow shadowhunters. Key among her friends is Luke, a werewolf and former shadowhunter who has taken the role of Clary's father her entire life.

Clary learns that her father, Valentine, needs the blood of several creatures in order to complete the ritual that will summon the demons for his army. He kills children, including a fairy, and drains their blood as part of the ritual but still needs a werewolf child and a vampire child. Valentine kidnaps friends of Clary for this purpose. Simon, a former human friend of Clary's who is now a vampire, and Maia, a member of Luke's pack, are being held on Valentine's ship. Clary and Jace, a shadowhunter who Clary believes is her brother, are at the heart of the effort to save Maia and Simon. Other shadowhunters join them, hoping to defeat Valentine before he is able to complete his plan.

Aboard the ship, Clary confronts her father but is unable to kill him. Valentine believes he has killed Simon but Jace revives Simon with his own blood. This changes Simon's makeup and he is no longer endangered by sunlight. By this time, Clary and Jace have come to realize they have powers they haven't even begun to utilize. Armed with her stele - a small wandlike instrument used to draw magic runes - Clary allows her creativity to take over and she tears Valentine's ship apart, putting an end to the bloody battle between Valentine's demons and the shadowhunters trying to destroy him. The ship sinks and though the core group of characters remains intact, there were casualties.

As the book comes to a close, Clary realizes Luke has always been in love with her mother but has never said the words aloud. This prompts Clary to tell Jace that the feelings she has for him are not those of sisterly love, but Jace beats her to the punch, saying that he promises to love her as a brother. Clary feels forced to accept that. Clary then goes to the hospital to visit her mother and she encounters a woman on the steps who says she was friends with Clary's mother and knows that a self-induced spell is keeping her in a coma.