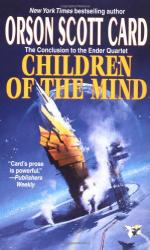 Plot Summary
+Chapters Summary and Analysis
'I'm Not Myself'
'You Don't Believe in God'
'There are Too Many of Us'
'I am a Man of Perfect Simplicity'
'Nobody is Rational'
'Life is a Suicide Mission'
'I Offer Her this Poor Vessal'
'What Matters is What Fiction You Believe'
'It Smells Like Life to Me'
'This Has Always Been Your Body'
'You Called Me Back From Darkness'
'Am I Betraying Ender?'
'Till Death Ends All Surprises'
'How They Communicate with Animals'
'We're Giving You a Second Chance'
'How Do You Know They Aren't Quivering in Terror?'
'The Road Goes On Without Him Now'
Free Quiz
Characters
Objects/Places
Themes
Style
Quotes
Topics for Discussion
Order our Children of the Mind Study Guide

Orson Scott Card
This Study Guide consists of approximately 66 pages of chapter summaries, quotes, character analysis, themes, and more - everything you need to sharpen your knowledge of Children of the Mind.

Children of the Mind Summary & Study Guide includes comprehensive information and analysis to help you understand the book. This study guide contains the following sections:

This detailed literature summary also contains Topics for Discussion and a Free Quiz on Children of the Mind by Orson Scott Card.

Children of the Mind is the fourth and final novel in the Ender quartet, continuing precisely where Xenocide leaves off. In fact, the novel begins even at the moment when Si-Wang-mu, the young servant girl from Path, joins Ender's brainchild Peter to join him in his mission to stop the Lusitania Fleet from destroying Lusitania. Meanwhile, Ender's stepson Miro and Young Valentine, Ender's other child of the mind, continue scouting for new habitable planets. Jane, the incredible being who dwells in the computer and long distance communication networks, rapidly moves colonists off the planet using her newly acquired ability to affect instant interstellar travel before her own imminent destruction because of Starways Congress ordering her shut down.

With catastrophe around the corner, Jane and her allies could sorely use Ender's help but Ender, fatigued by over 3000 years of actively steering the fate of the human race, retreats into the monastic order "The Children of the Mind" in order to reconcile with his estranged wife, Novinha. Miro entreats his assistance, but Ender refuses, feeling absolved from responsibility as he has created Peter and Val, two alternate versions of himself, to continue his work. He even offers Young Val's body to Jane, telling Miro that she is welcome to it if she can find a way to inhabit it before she is shut down. Yet maintaining three separate bodies is a strain on Ender. Not only is Young Val disintegrating, but also Ender himself collapses, near death, with the effort of keeping three bodies alive. At Miro's urging, the Hive Queen begins working with her sisters and the pequenino fathertrees to discover a way to save Jane by helping her move into Young Val's body.

Peter and Si Wang-mu begin their journey on the planet of Divine Wind. It's a world founded by Japanese colonists, in order to meet Aimaina Hikari, the Japanese philosopher who is the intellectual and spiritual head of the Necessarian school. Hikari was responsible for swinging the Starways Congress vote to send the Lusitania fleet. Their visit distresses him greatly. He turns to a friend on the world Pacifica for advice, prompting Peter and Wang-mu to visit there in order to attempt to sway Hikari's friend. On the Samoan world of Pacifica, Peter and Wang-mu consult the holy man Malu who advises them that Jane can indeed be saved and that Jane can inhabit "one but not both" of either Peter or Young Val's body.

The network shutdown begins, and Jane begins losing her abilities, her memories and even her sense of self. Human and the Hive Queen, using the greatest philotic web ever spun, manage to catch Jane's aiua (life force) and guide it to Ender's. Ender's aiua attempts to lead Jane's into the various bodies it inhabits but Jane's transfer to human form is unsuccessful. At the deepest level of his being, Ender is unable to surrender any of the bodies and even though Jane's aiua is powerful enough to take a body by force, it realizes it cannot exist in a body that would be in perpetual rebellion. Jane's aiua continues to explore and temporarily comes to inhabit the philotic connections among the mothertrees, which prevents her from dying.

Having scrambled in time to mount what could be a final and fatal mission to the descoladores' home planet before Jane's shutdown, Miro and Young Val are joined by Ela, Quara, the pequenino Firequencher, and a Hive worker. This enables them to keep in contact with the Hive Queen and therefore Lusitania. Young Val realizes she will not be able to give up her body to Jane unless she is convinced she has to die. She goads Miro into a terrible fight during which he convinces her that everyone aboard the ship wants her to die so they can live. Meanwhile, at Val's prompting, Novinha tells Ender she wants him to live as Peter and releases him from all obligations he has to her. This time, the aiuas move again, permanently. Val's sweetness and Ender's aiua move into Peter making a complete being. Jane's aiua assumes control of Young Val. However, Jane does not immediately regain her former abilities, and Miro's spacecraft continues to orbit the descoladore planet without any definite hope of return to Lusitania.

On Pacific Wind, Peter and Wang-mu are taken to a university to see the new "godproof" computer system brought online. Jane's allies and worshippers have managed to network thousands of computers and link them illegally to Starways Congress ansibles. Though the hardware represents a fraction of Jane's former capacity, she is able to retrieve her most vital programs and memories and reestablish herself. The new hardware, however, restricts her. It is not until she discovers how to use the philotic network among the mothertrees for storage that she regains sufficient capacity to once again initiate faster than light travel. Just as Jane is regaining her former abilities, the alert comes: the Lusitania Fleet has entered into range and deployed the Little Doctor. With no more than an hour left, Jane begins moving every colonist she can off the planet.

Jane enlists Peter's help, and he and Wang-mu take the Little Doctor aboard a shuttle making full use of Jane's abilities. Peter and Wang-mu return the evil device to the cargo hold of the very same ship that launched the weapon. The admiral in charge of the fleet has little success arresting Peter and Wang-mu given the ease with which Jane is able to teleport them from location to location. Before long, the admiral's first officer disables the Little Doctor, and Peter disarms the admiral, accidentally breaking two of his fingers. Grudgingly, the admiral is convinced to file a report with Starways Congress that explains how the descolada threat has been neutralized and that the Lusitania Rebellion was really little more than a misunderstanding.

Now that Lusitania has again become safe for colonists, many return from the new worlds. Ender's friends and family gather to lay him to rest. His student, Plikt, speaks his death. The same day he is laid to rest, Peter marries Wang-mu, and Jane weds Miro in a double, private ceremony. The novel ends with Jane transporting herself and the other newlyweds to some unknown location.

More summaries and resources for teaching or studying Children of the Mind.

Children of the Mind from BookRags. (c)2022 BookRags, Inc. All rights reserved.