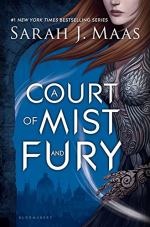 A Court of Mist and Fury Symbols & Objects

Sarah J. Maas
This Study Guide consists of approximately 83 pages of chapter summaries, quotes, character analysis, themes, and more - everything you need to sharpen your knowledge of A Court of Mist and Fury.

Tamlin places harsh restrictions on Fayre during her time at his home. The restrictions symbolize his need to control her, as well as his unnatural fear that something will happen to her. When he goes too far by locking her in the house, Rhysand sends Morrigan to rescue her and Fayre makes the decision to end her relationship with Tamlin.

These tattoos symbolize a bond that exists between Rhysand and Fayre, which is a symbolic bridge between their minds. Rhysand describes the bond, saying that Fayre sometimes shields her thoughts from him but sometimes opens her thoughts, “shouting your thoughts across the bridge to me” (56). Fayre learns that she can put up “a wall of adamant” (66) that keeps Rhysand at bay.

The mating bond represents the true love that exists between some faeries, including between Rhysand and Fayre, though Rhysand...

More summaries and resources for teaching or studying A Court of Mist and Fury.

A Court of Mist and Fury from BookRags. (c)2023 BookRags, Inc. All rights reserved.