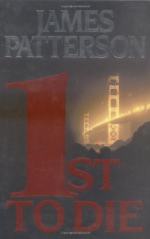 James Patterson
This Study Guide consists of approximately 33 pages of chapter summaries, quotes, character analysis, themes, and more - everything you need to sharpen your knowledge of 1st to Die.

1st to Die: A Novel Summary & Study Guide includes comprehensive information and analysis to help you understand the book. This study guide contains the following sections:

This detailed literature summary also contains Topics for Discussion and a Free Quiz on 1st to Die: A Novel by James Patterson.

First to Die by James Patterson is the first novel in the Women's Murder Club series. Lindsay Boxer is a inspector with the San Francisco police department, a strongly male-oriented career in which she has excelled for six years. However a health crisis and a high profile case threaten to destroy all those years of hard work. Lindsay turns to her good friend, Claire, and new friend, Cindy, and forms the Women's Murder Club in order to not only garner support from other women who understand the struggle of working in a male-oriented job but to help her solve this difficult murder case. Along the way, the club will also include Jill, a highly-ambitious assistant district attorney, and Chris Raleigh, Lindsay's new partner and new lover. First to Die is another exciting crime novel by bestselling author James Patterson that will more than live up to his fan's expectations.

Lindsay Boxer learns that she has a rare form of anemia called Negli's. This diagnosis is potentially fatal, leaving Lindsay emotionally vulnerable when she arrives on the scene of a double murder at a local luxury hotel. The couple had just gotten married and the female victim is still in her wedding dress. Both victims were stabbed, a brutal crime that seems like an assault on hope that Lindsay cannot handle so soon on the heels of her diagnosis. Lindsay is so emotionally touched by the scene that she nearly confides in an ambitious reporter, Cindy Thomas, when they run into one another in the ladies room.

Immediately after the beginning to investigate the bride and groom case, Lindsay is informed she will be working with a new partner, Chris Raleigh, a cop who has been working in the mayor's office for the past few years to mediate with the press in high profile cases. Lindsay is demoted from lead on the case to second and resents Raleigh's presence. However, as they work together, Lindsay learns that Raleigh is a good cop whose main concern is to find the killer. Together they begin searching for motives among the couples' friends and family, researching everything, including the father of the groom's business dealings.

As Lindsay begins treatments for Negli's, another murder takes place. Lindsay and Raleigh go to Napa Valley where the second couple was married and were staying in a local hotel before flying to Cancun for their honeymoon. As Lindsay and Raleigh discuss the case with a local cop, Cindy Thomas arrives. Lindsay agrees to drive home with Cindy if she will promise to keep any information Lindsay gives her secret until Lindsay gives her the okay. Lindsay discovers during this ride that she and Cindy have so much in common that Lindsey invites Cindy to meet Claire, another friend of Lindsay's. Over drinks, the ladies realize they all have an interest in the bride and groom case—Claire in her capacity as coroner, Cindy as a reporter, and Lindsay as the detective on the case. They decide to pool their knowledge and work the case together, forming the Women's Murder Club.

The next day, Lindsay and Raleigh return to Napa where they see the place where the bodies were found, an abandoned vineyard. Claire drives up to speak to the coroner and view the bodies. Claire and Lindsay drive back to San Francisco and Lindsay tells Claire about her devastating medical condition. Claire is distraught but understands Lindsay's need to continue to focus on the case.

Lindsay and Raleigh begin to search for a connection between the two couples while continuing to follow up on evidence found in both cases. Nothing seems to connect until Lindsay realizes that both brides got their dresses at the same Saks store in San Francisco. An interview with the clerk there garners a sketch of the suspect. This brings in another witness who spoke to a similarly-appearing man at the Brandt wedding. It seems the case is beginning to break when another bride and groom are found murdered.

Lindsay and Raleigh fly to Cleveland where they learn that Kathy and James Voskuhl were murdered during their reception at the Rock and Roll Hall of Fame. The security tapes reveal a partial view of the suspected killer. Interviews with the bride's family and friends also reveal that Kathy was having an ongoing relationship with an abusive man whom she claimed was famous. This man turns out to be Nicholas Jenks, a famous writer residing in San Francisco. Jenks becomes the main suspect in the case. However, his fame causes Lindsay and Raleigh to be forced to move cautiously.

Lindsay and Raleigh visit with the district attorney's office in the hopes of getting a search warrant for Jenks' house, but they are turned down. However, this meeting inspires Lindsay to invite Jill Bernhardt to join the Women's Murder Club. At the same time, Lindsay begins a passionate affair with Raleigh despite the fact that her treatments for Negli's do not appear to be successful. During this time as well, Lindsay interviews Jenks' ex-wife and learns about a book he wrote early in his career that parallels the bride and groom murders. This gives Lindsay the break she needs to arrest Jenks. After the arrest, the police find evidence in Jenks' house that appears to conclusively point to him as the killer.

After Jenks is arrested he claims he has been set up. The more Lindsay thinks about it, the more she thinks he is right. Lindsay begins to suspect Joanna Wade, Jenks' ex-wife, to be the killer. When Jenks escapes police custody, Lindsay goes to Joanna's house to search for Jenks but finds her dead. Raleigh follows someone who was seen leaving Joanna's building dressed like Jenks. When Lindsay catches up to Raleigh, she discovers he has been shot. At the same time, Lindsay comes across Jenks and his current wife arguing. When the wife attempts to shoot Jenks, Lindsay shoots her. Lindsay returns to Raleigh just as he dies.

After Raleigh's death, Lindsay falls into a depression despite the fact that her Negli's has responded to treatment and she will live. One day after everything has died down, Jenks breaks in on Lindsay and admits that he was behind the killings all along. Jenks tries to kill Lindsay, but she manages to kill him first.

More summaries and resources for teaching or studying 1st to Die: A Novel.