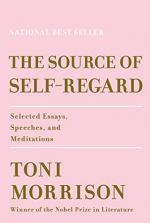 Toni Morrison
This set of Lesson Plans consists of approximately 194 pages of tests, essay questions, lessons, and other teaching materials.

1. In "The Source of Self-Regard," what image does Morrison say she uses to convey the horrors of slavery?

2. In "The Site of Memory," Morrison proposes to show how memoir is similar to and different from what?

3. In "God's Language," Morrison uses the word "ruminating" to describe what?

4. In "The Site of Memory," Morrison remarks upon what tone common in slave narratives?

5. In "The Trouble with Paradise," Morrison claims that in the modern world, what has become "trivial"?

1. In “Invisible Ink," Morrison proposes that current ways of thinking about the interaction between reader and text are missing an element: the "invisible ink" that can manipulate the reader. Explain what she means by this.

2. In “James Baldwin Eulogy,” Morrison explains that Baldwin brought "three gifts." What is this an allusion to, and how does it function in this piece?

3. In “The Source of Self-Regard," what does Morrison say made her uncomfortable about the letters she received from students, and why did it make her feel this way?

4. In “Rememory," Morrison describes her writing process using memory and explains how it is similar to a thematic and narrative element in one of her books. What is her process, and which book's narrative does she see it reflected in.

5. In “Memory, Creation, and Fiction," what Black cultural aesthetic expectations does Morrison discuss as important in her work, and why is it important to her to use them?

6. In “Faulkner and Women," what does Morrison say Faulkner's influence on her has been?

7. In “Introduction of Peter Sellars," what are the main points of Morrison's praise for Peter Sellars as an artist?

8. In “The Site of Memory," what does Morrison say about how image and memory interacted for her in relation to her father's death and Song of Solomon?

9. In “James Baldwin Eulogy,” what does Morrison describe as Baldwin's contribution to language?

10. In “Unspeakable Things Unspoken," what does Morrison say she is trying to evoke with the image of nightshade in the beginning of Sula?

In “The Nobel Lecture in Literature,” Morrison uses a folktale to structure her lecture. Explain how she interprets and then reinterprets this folktale.

In “The War on Error,” Morrison employs a conceit comparing governments to students. Explain how she develops this conceit and how it impacts an audience’s understanding of her central point in “The War on Error.”

In “Black Matter(s),” Morrison argues that American literature and “Americanness” have been shaped by the slave trade and by racism against Black Americans. Explain how she supports this claim and then evaluate the strength or weakness of her argument.

More summaries and resources for teaching or studying The Source of Self-Regard.

The Source of Self-Regard from BookRags. (c)2022 BookRags, Inc. All rights reserved.