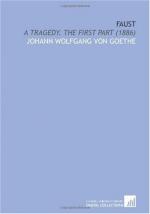 2. What is Martha attempting to do with Mephistopheles in "A Garden"?
(a) Seduce him.
(b) Get him drunk.
(c) Take him to confession.
(d) Get a marriage proposal.

3. What does Faust discover from Gretchen when he tries to help her escape from prison?
(a) She killed their baby.
(b) She meant to murder her mother.
(c) She attempted suicide.
(d) She killed her priest.

4. What purpose does "A Walpurgis's Night Dream" serve in this play?
(a) Comic relief.
(b) A ritual to conjure up a spell of eternal darkness.
(c) Commentary on Faust and Gretchen.
(d) A cover for Faust's escape.

5. What does Gretchen believe will happen when she and Faust are separated in "A Garden?"
(a) Faust will not be able to stop thinking about her.
(b) Faust will probably need to laugh about her ignorance.
(c) Gretchen will cry herself to sleep out of loneliness.
(d) He will forget about her.

7. While considering Faust's request in "Martha's Garden," of what is Gretchen afraid?
(a) Her mother will catch them.
(b) Her mother will not approve of their marriage.
(c) Her reputation will be ruined.
(d) God will punish her.

8. How does Valentine currently feel about Gretchen?
(a) He feels nothing but love and understanding for her.
(b) He is furious with her.
(c) He is sympathetic towards her.
(d) He feels a murderous hatred towards her.

9. What does Mephistopheles proclaim to be Gretchen's fate at the end of the play?
(a) She will become a martyr for women everywhere.
(b) She will commit suicide.
(c) She will live her days out in a madhouse.
(d) She is doomed.

11. Initially, what is the only thing Gretchen recognizes as Faust when he is in her prison cell?
(a) His hands.
(b) His voice.
(c) His eyes.
(d) His lips.

12. What does Faust promise Gretchen in "A Garden"?
(a) He will seek approval for their marriage from her mother.
(b) He will go to confession.
(c) He will get rid of Mephistopheles.
(d) He will love her forever.

14. Which of the following is not a character in "A Walpurgis Night's Dream"?
(a) The idealist.
(b) The dogmatist.
(c) The futurist.
(d) The realist.

1. What is Faust unable to convince Gretchen to do in "A Prison"?

2. During "Martha's Garden," what does Gretchen discuss with Faust?

3. What scene is being presented in "A Walpurgis Night's Dream"?

4. Who criticizes the dancing on the mountain?

5. How does Gretchen admit to feeling when Faust is not around?