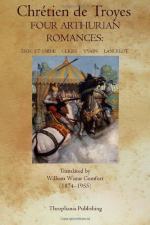 5. After the Joy has ended, what does Erec decide to do?
(a) Go back to King Arthur.
(b) Stay with King Evrain.
(c) Continue on his journey.
(d) Seek out another adventure.

6. Who is the first person Erec encounters on his journey for the Joy of the Court?
(a) King Evrain.
(b) An attractive maiden sitting on a bed.
(c) A beast.
(d) A handsome and tall knight.

8. What is the first glory of Alexander's knighthood?
(a) Preventing the traitor from killing King Arthur.
(b) Presenting the Queen with his prisoners.
(c) Marrying Soredamour.
(d) Pleding loyalty to King Arthur.

1. What request does Alexander make of the King?

2. What custom does King Arthur wish to revive?

3. At King Arthur's court, what is the color of armor that Cliges wears on the third day of the tournament?

4. Who does Queen Guinevere send second to discover the identity of the maiden who rides with a knight and a dwarf?

5. Who says "Love is worse than Hate because he wounds and destroys his devotee"?