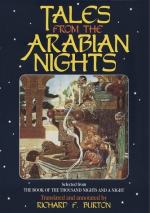 1. How does the Caliph respond to the story of Ali The Persian?
(a) With confusion and request for more information.
(b) With laughter and appreciation.
(c) By sending him away.
(d) With anger.

1. In the story of The Sweep and The Noble Lady, what do the pilgrims do with the praying man?

3. What comes out of the black jar after the fisherman rubs it?

4. After refusing marriage a second time, the king becomes enraged with Kamar and does what?

5. In what location does The Tale of Kamar Al-Zaman begin?

1. How might Shahrazad's tale in The Tale of The Three Apples whittle away at the king's assumption that all women are faithless and untrustworthy?

2. In the opening chapter of The Story of King Shahryar And His Brother, Shahrazad is spared eligibility for beheading because she is one of the Wazir's daughters. Is her request to marry the king an act of fate/Allah's power, or rather an a human aspect of her personality?

3. Through this story of Nur Al-Din Ali And His Son Al-Din Hasan, how does Shahrazad indirectly remind King Shahryar of the value of family?

4. What humorous fact is revealed in regards to the two men fighting for the bag in Ali The Persian?

5. How is the main character in the story of The Ruined Man Who Became Rich Again Through A Dream rewarded for his faith?

6. What message through the story is meant for the King from Shahrazad in The City of Many-Columned Iram and Abdullah Son of Abi Kalibah?

7. Correlate the experience of visiting the Caliph for help/direction in the Porter and The Three Ladies of Baghdad to visiting another person of power for help in the present day.

8. What might Shahrazad be suggesting through her tale to the king in The Hermits?

9. In Hatim Of the Tribe of Tayy, how does this story blur the lines between the living and the dead?

10. What does the circular nature and connectedness of the happenings in The Tale of The Three Apples imply?

More summaries and resources for teaching or studying The Arabian Nights.