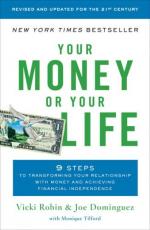 Your Money or Your Life Summary & Study Guide

Joe Dominguez
This Study Guide consists of approximately 44 pages of chapter summaries, quotes, character analysis, themes, and more - everything you need to sharpen your knowledge of Your Money or Your Life.

Your Money or Your Life Summary & Study Guide Description

Your Money or Your Life Summary & Study Guide includes comprehensive information and analysis to help you understand the book. This study guide contains the following sections:

This detailed literature summary also contains Topics for Discussion and a Free Quiz on Your Money or Your Life by Joe Dominguez.

Your Money or Your Life: Transforming Your Relationship with Money and Achieving Financial Independence is a systematic guide to achieving financial independence, just as the subtitle explains. In this book, the authors present a nine-step process for achieving financial independence. Although the book is over 300 pages long, the actual steps in the process of achieving financial dependence are very simple. Indeed, they are summarized in the epilogue in fewer than nine pages. The rest of the book is necessary, however, because it places the nine steps in context. Much of the book is simply about convincing the reader that the steps will work and explaining why it is important for the reader to complete each and every step without skipping any of them.

According to the book, there are nine steps to achieve financial independence. First, the program participant figures out how much money they have earned during their lifetime and how much their current net worth is. Then they figure out how much time and money they are really spending right now on their job in order to figure out their real current hourly wage and keep track of every bit of money down to the penny that comes into their life or goes out of their life. After that, they create a table of income and expenses and convert the money they spend into hours of life energy spent to figure out where their money is really going and how much it is really costing them. Using this information, they ask three questions about everything they spend money on. First, they ask whether it was worth the amount of life energy they spent. Then they question whether the expenditure is in alignment with their goals and the purpose of their life. Finally, they determine if this expense could change if they did not have to work for a living, and if so, how much.

After that, they make a wall chart that shows their total monthly income and expenses, and post it where they will see it often. Now that they have an accurate system for keeping track of their finances, they are ready to minimize their spending and maximize their income. After a few months of keeping track of their finances this way, their expenses will probably go down far below their income and they will have extra money left at the end of the month. They can use this money as capital and invest it. They can keep track of the income from their investments on the same wall chart. Using the wall chart, they can figure out when they will have enough capital invested to be able to live off from the interest. They can then invest their capital in a safe, systematic way until they have enough income from it to pay their expenses. At that point, they are financially independent.

Even though the book breaks this process up into nine steps, it can be summarized more quickly in five steps:

1. Become very conscious of how money is spent.

4. Pay off debts and save for "emergencies."

More summaries and resources for teaching or studying Your Money or Your Life.

Your Money or Your Life from BookRags. (c)2022 BookRags, Inc. All rights reserved.