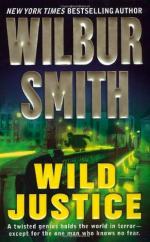 Wilbur Smith
This Study Guide consists of approximately 57 pages of chapter summaries, quotes, character analysis, themes, and more - everything you need to sharpen your knowledge of Wild Justice.

This detailed literature summary also contains Topics for Discussion and a Free Quiz on Wild Justice by Wilbur Smith.

Wild Justice by Wilbur Smith is an explosive story that deals with an issue of worldwide concern. A British Airways flight departs from Mauritius, unaware that four well armed terrorists are on board. As soon as they are airborne, one of the girls in this group opens a coco-de-mer to reveal the concussive grenades inside. She takes one, removes the pin, and walks into the galley. When the staff requests she return to her seat, she shows them her hand and insists to be taken to flight control. Ingrid is in control within moments of her entry, knowing which circuits need to be turned off, where the emergency signals are and how to disarm them. Four hundred and one passengers are still unaware of their predicament.

Peter Stride is the General in charge of one of the three branches of Atlas named Thor, and is looking forward to a weekend off with his daughter, but instead has little more than enough time for dinner before being called back to deal with the crisis brewing as a result of the British Airways flight 070 that has been out of communication and has not checked in.

Their demands are simple - a list of what they call 'true leaders' released, one million gold Kruger Rand coins, their position televised on prime time, and the assurance that a resolution calling for economic sanctions on South Africa will not be vetoed by any member of the Security Council of the U.N. The first three demands met will trigger the release of women and children, and the last, to occur three days later, will release the men.

A branch of the Atlas team, Thor, under the command of General Peter Stride, is called in, and they soon realize that this is no ordinary hostage situation. Peter is recognized and referred to by name when he approaches the leader in an attempt at negotiation, and that leads him to think that someone very high up is involved as the Atlas group is not a publicized response team. After four passengers are killed, he leads the team in and regains control without further incident, killing three of the four hostages. The leader taunts him, insisting she'll be free to act again in no time. Believing he has lost his position for going in against direct orders, Peter decides he has nothing to lose. He shoots and kills her while she is in custody, and then he quits.

He returns to the family home, Abbots Yew, which is still occupied by his brother Steven, and is approached by Baroness Magda Altmann with a job offer he cannot refuse. He is to aid her in the hunt for the terrorist, Caliph, responsible for the kidnapping and murder of her husband and for other acts of terrorism, including the hostage taking that has ended his career. In the weeks that follow, Peter's relationship with Magda evolves into something special. Colin Noble, Peter's second in command at Thor, shows up and asks Peter to return to Atlas for a meeting with his old boss, Kingston Parker. While he is on his way there, Peter's daughter Melissa-Jane is kidnapped and her finger is sent to Magda's as proof. Peter asks for help from Atlas, and Colin and his team help him to rescue Melissa, who is being held by Caliph's henchmen in a remote town in Ireland. Peter is told Atlas is still employing him and asks him to work undercover, watching their prime suspect Magda. After giving him more information that he can absorb, they send him back. She senses a reserve in him, and for a time keeps her distance. When she finally summons him to her private island, Peter is prepared to kill her, but she has been warned and fends him off. During their struggle, Peter realizes he can't kill her even if she is Caliph, and in their subsequent conversations, he learns more than he bargains for. To ensure her safety, she goes into hiding, and Peter discovers his brother is deeply involved. In a tale filled with twists and turns and unexpected events, Wilbur Smith leads the reader on a wild ride that has surprises lasting to the very last page. The mastermind, Caliph, is killed, but his identity, and the identities of those who protect him, are a surprise to all.

More summaries and resources for teaching or studying Wild Justice.