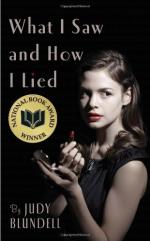 What I Saw and How I Lied Summary & Study Guide

What I Saw and How I Lied Summary & Study Guide Description

What I Saw and How I Lied Summary & Study Guide includes comprehensive information and analysis to help you understand the book. This study guide contains the following sections:

This detailed literature summary also contains Topics for Discussion on What I Saw and How I Lied by Judy Blundell.

In the novel "What I Saw and How I Lied" by Judy Blundell, narrator Evie Spooner tells the story of her realization that her parents, whom she had always admired, were not as upstanding and glamorous as she had always thought they were. She also learns how truly unfair the world is, especially to those who are different. Evie's biggest step into adulthood comes when the man who is the focus of Evie's first serious crush is killed in a questionable boating accident which involves her parents. Evie puts her own reputation on the line to keep her parents out of jail but swears to herself afterward to become a better person.

Themes addressed in the novel include the description of the road that Evie travels as she comes to realize what has been happening in her family. As she looks back on the circumstances that have caused her parents to get into trouble, Evie realizes that she must sacrifice herself in order to save her parents. Even after she lies on the witness stand so that her parents aren't charged with murder and sent to jail, Evie still realizes her parents need to be punished. She does out justice by stealing the money that Joe had gotten from the items he stole from the Jews and giving it to Mrs. Grayson so that she can get it back to needy Jews. By giving away this money, Evie also ensures that the family is left living with Joe's mother, a punishment that she believes is fitting for them all.

Another minor theme in the novel is the post-war conditions in America. Evie often mentions that the country seems to be heaving a sigh of relief with its men having returned from overseas and the lean time of war finally finished. The story is set in this sudden luxury and relief after slim times. Despite this atmosphere, however, Evie learns that there are still personal battles to be fought. While Evie believes that the war was fought to make life better for the Jews, she learns that the Jews of America still fight the stigma of segregation.