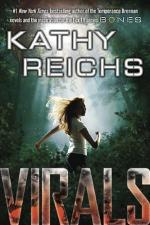 Kathy Reichs
This Study Guide consists of approximately 57 pages of chapter summaries, quotes, character analysis, themes, and more - everything you need to sharpen your knowledge of Virals.

Virals by Kathy Reichs is a fictional account of a group of adolescents who stumble onto the decades old murder of Katherine Heaton. Katherine was a young student who was attempting to create a project that centered on endangered species. As luck would have it, she discovers a colony of eagles living on Cole Island, but her discovery is not welcomed by all. The owners of Cole Island register her presence there and before she is able to tell anyone her amazing discovery, she is killed and her body buried on Loggerhead Island - a research facility. As Tory Brennan unravels the mystery, she takes herself and her friends deeper and deeper down the rabbit hole.

It all begins when Tory and her friends Ben, Shelton and Hiram go to Loggerhead Island to see if they can find a group of wolf-dogs who have made the island their home. They had seen them before, and Tory had even rescued the youngest pup from a shaft he'd fallen into, and named him Coop. Lately however, the young pup had vanished and late at night the other three had taken to circling the research facility and howling. Tory wants to find the pack, and Coop if possible. Caught on the island by the head researcher, Dr. Karsten, they are warned away from the restricted areas after he makes it clear that he would rather they found somewhere else to amuse themselves. Knowing they have permission to be there takes some of the venom from Karsten's warning. They carry on, following a new trail that leads them right into a restricted region. Tory sits under a tree and suffers an aerial attack from a particularly agitated primate. The tattoo on her chest indicates she is a research subject, and she is displaying unusually aggressive behavior. She throws something shiny at Tory, and Shelton recognizes it as a dog tag immediately. Tory decides to try to trace the owner, which is where everything begins. After trying to clean the tag at home without success, she talks the boys into breaking into Karsten's lab to use the sonicator to clean it. Shelton picks the locks successfully and they manage to get into the correct lab. The tag is cleaned and they are almost ready to leave when Ben returns and asks them to come upstairs with him. He leads them to a newly installed security door behind which they can clearly hear a dog barking. The keyless entry is one that Shelton can't pick, but by entering the default code, they are able to get in. To their surprise, they find the young wolf-dog pup who has been missing for over a week. He is in a plexiglass cage, hooked up to intravenous lines and wearing a collar to prevent him from removing them. Tory looks over the clipboard attached to the cage and sees that Coop has Parvovirus and is scheduled to be destroyed immediately. Tory won't let that happen. She makes a snap decision to save the young cub. They free him, taking along bags of intravenous fluids and several vials of antibiotic, and then take him to an abandoned bunker that they use as a clubhouse. There, they nurse the pup slowly back to health, but in the process become ill themselves. While Parvovirus is generally species specific, this particular strain had been created by Dr. Karsten, and blended a human strain with a wolf strain. The results were a new and highly contagious virus that infects all four of them, mixing their DNA with that of the wolf pack and making them all relatives at the most basic level. Meanwhile, Tory tracks the dog tag to Katherine Heaton, who had gone missing and never been found. In the process of solving her disappearance, they find her body; uncover the murderer; learn about the endangered eagle population; and tie the murder to one of the more prominent citizens in their small town. To correct the situation, they call on new found abilities that are more wolf-like than human, and learn that they will never be the same. It is a secret they agree to keep between them - the Virals.

More summaries and resources for teaching or studying Virals.