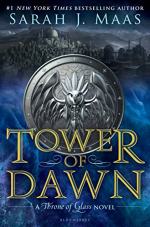 Sarah J. Maas
This Study Guide consists of approximately 63 pages of chapter summaries, quotes, character analysis, themes, and more - everything you need to sharpen your knowledge of Tower of Dawn.

This detailed literature summary also contains Quotes and a Free Quiz on Tower of Dawn (Throne of Glass) by Sarah J. Maas.

The following version of this book was used to create this study guide: Maas, Sarah J. Tower of Dawn. Bloomsbury, 2017.

Chaol Westfall, the Hand to the King of Adarlan, and Nesryn Faliq, Captain of the Royal Guard, traveled to the Southern Continent to secure the khagan as an ally for King Dorian and find a healer for Chaol’s recent injury that paralyzed him from the hips down. In the capital city of Antica, the khagan and five of his children welcomed Chaol and Nesryn to stay with them in the palace. The royal family mourned the death of the khagan’s youngest daughter. Prince Kashin believe that the death was a murder, not a suicide. Hafiza, the Torre Cesme’s Healer on High, assigned Yrene Towers to heal Chaol’s injury. Yrene despised Chaol because he was a lord from Adarlan, which had conquered her home country of Fenharrow. She reluctantly agreed to heal him. She discovered Valg magic in his wounds. Yrene explored the Torre library for books about the Valg. She thought someone was following her and then found a dead healer in the library.

Yrene continued to heal Chaol while Nesryn spent time with Prince Sartaq. The healing gave Yrene and Chaol visions of their memories and the Valg. Chaol joined Yrene at the self-defense class she taught the acolytes at the Torre. He regained movement in his toes. Princess Hasar asked Yrene to spy on Chaol for her. The khagan’s children threw an elaborate party at the palace for Tehome’s Day with provocative performers and opiates. Hasar persuaded Yrene to speak with Chaol. Yrene admitted to him that Hasar wanted her to spy. Due to the effects of the smoke, they sat close together and realized that they were attracted to each other. The next morning, Yrene went to Chaol’s room and felt jealous when she found him in bed with Nesryn. She showed him a book of Wyrdmarks she found in the library, which Chaol told her to hide.

Nesryn joined Sartaq on his trip to the Tavan Mountains to visit his rukhin clan. She left a note behind for Chaol. Yrene and Chaol scoured the Torre library. Chaol stayed the night in the Torre’s physicians’ compound. In the morning, Chaol returned to his room and read Nesryn’s note. He felt guilty about his cold treatment of her since their arrival in Antica. He argued with Yrene when she came to his room for his healing exercises. Hasar told Yrene about Nesryn’s departure. Yrene intended to speak to Chaol when she realized someone was following her. She locked herself in his room as the Valg attacker tried to break open the door. Chaol comforted her until the palace guards came, by which time the Valg had vanished. Yrene stayed in Chaol’s rooms. In the morning, Chaol trained with the palace guards.

Nesryn and Sartaq flew to the Eridun clan in the Tavan Mountains after a long journey riding Kadara. Nesryn met Borte, Sartaq’s hearth-sister, Houlun, their hearth-mother, and Falkan, a visiting merchant from Adarlan. Houlun informed them that stygian spiders had been poaching ruk hatchlings from their nests. She told them about the history of Valg in the mountains. Nesryn and Sartaq visited Fae watchtowers and the stygian spiders ambushed them. Falkan helped save them and revealed that he was a shape-shifter.

For the next three weeks, Yrene continued to heal Chaol’s injury. Hasar and Arghun tried to persuade the khagan not to get involved in the war by creating mistrust surrounding Queen Aelin of Terrasen, Dorian’s ally. Chaol confronted the khagan about how it was in his best interests to ally with Adarlan in the war. The khagan threw Chaol out of his meeting. Yrene and Chaol argued. Chaol stood up on his own and walked toward her to apologize. They kissed. Yrene convinced Hasar to throw her a birthday party at the Aksara Oasis, which held restricted information about the Valg. During the party, Hasar insulted Chaol, so Yrene pushed her into the pool. Chaol and Yrene slept together.

Nesryn and Sartaq got caught in a stygian spider trap in the Dagul Fells. When Sartaq thought the spider would capture him, he confessed to Nesryn that he was in love with her. The spider caught them both and wrapped them in silk. It told Nesryn that the spiders were loyal to Maeve, the Queen of the Valg who had been pretending to be Fae for centuries. Borte led a group of ruk to free Nesryn and Sartaq from the spiders. A few days later, Nesryn received a letter from Chaol begging them to return to the palace.

Chaol and Yrene returned to the palace the next morning. Chaol found that someone had ransacked his and Nesryn’s rooms and stolen the books about the Valg. Yrene finished the healing process and Chaol regained movement in his legs. They confessed their love for one another. Later, they went to meet Hafiza in the Torre, but could not find her. They found her in the tunnels beneath the Torre library. Princess Duva was possessed by a Valg and had captured her. Duva confessed to killing her younger sister. She threatened to kill Hafiza if Yrene did not go with her. Chaol blocked a magical attack Duva sent at Yrene, which tore open his wound and paralyzed his legs again. Yrene used her self-defense skills to disarm Duva, but could not bring herself to kill the pregnant princess. She made a deal with a god to heal Chaol by bonding their lives together. Nesryn and Sartaq found them. Yrene used her healing magic to save Duva’s life from the Valg. The khagan promised to join the war to thank her. Sartaq rallied 1,000 rukhin to ally with them in the war. Hasar agreed to join them too.

Nesryn introduced Sartaq to her family in Antica. Sartaq told her that the khagan named him as his heir. He would go to Adarlan for the war and wanted Nesryn to return to Antica with him afterward. They kissed. Yrene and Chaol got married before leaving Antica. Aboard the ship leaving Antica, Chaol identified that the woman who had taught Yrene self-defense and given her enough money to travel to the Torre Cesme two years ago was Aelin.

More summaries and resources for teaching or studying Tower of Dawn (Throne of Glass).