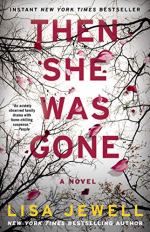 Related Topics
The House We Grew Up In
The Family Upstairs

Then She Was Gone Summary & Study Guide

Lisa Jewell
This Study Guide consists of approximately 56 pages of chapter summaries, quotes, character analysis, themes, and more - everything you need to sharpen your knowledge of Then She Was Gone.

Then She Was Gone Summary & Study Guide Description

Then She Was Gone Summary & Study Guide includes comprehensive information and analysis to help you understand the book. This study guide contains the following sections:

This detailed literature summary also contains Quotes and a Free Quiz on Then She Was Gone by Lisa Jewell .

The following version of this book was used to create the guide: Jewell, Lisa. Then She Was Gone. New York: Simon & Schuster, 2017.

Laurel Mack is an average mother, raising her family as best she can in her home in London, England. She has three children and a loving husband. One afternoon, her youngest daughter, 15-year-old Ellie, goes missing on her way to the library to study.

Ellie Mack does not come home. The investigation into her disappearance returns no results. For ten years, Laurel has lived a life of sadness, hoping beyond hope that she may see her daughter again, happy and healthy. This hope is vanquished when the remains of Ellie’s body are found in a ditch.

While trying to move on from her daughter’s death, Laurel becomes acquainted with a man Floyd Dunn. The two begin a relationship and soon thereafter, Laurel meets his daughter, Poppy. She can hardly contain herself when she sees Poppy for the first time, as she looks identical to her lost daughter.

Noelle Donnelly was Ellie’s math tutor until Ellie one day asks Laurel to cancel Noelle’s sessions. Before Ellie's disappearance, Noelle had started to act strangely with Ellie, asking her questions about her hopes and dreams. As it turns out, Noelle had become obsessed with Ellie. To her, this young woman was perfect and beautiful. She did not take the rejection well.

Noelle had begun to stalk Ellie. She had gotten to know her routines in order to stage a chance meeting with the young girl in order to lure her into her home. The opportunity arose one afternoon as Ellie was walking to the library. Once inside Noelle’s house, Noelle drugged Ellie and confined her to the basement. It was there that she spent the last year and a half of her life, during which time Noelle once again drugged her, and impregnated her, in order to make a baby to save her failing relationship with Floyd.

As Laurel’s relationship with Floyd progresses, she begins to see warning signs that he may not be who he claims he is. His outward projection seems to be a mask.

It is revealed that Noelle used Ellie’s body and internet-bought sperm to create Poppy in an effort to make Floyd love her because she was incapable of becoming pregnant. Once Poppy was four years old, Floyd asked for sole custody of her, as Noelle was incapable of parenting her. Noelle was upset by this and explained to Floyd exactly what she had done to create Poppy. Infuriated, Floyd lunged at Noelle and accidentally killed her.

Five years later, Floyd sees a documentary about Ellie’s disappearance and realizes that she was Poppy’s mother. With this information, he befriends Laurel in order to connect the two. Unable to live with what he and Noelle have done, he commits suicide. Laurel is left as the sole guardian of Poppy, giving her a second chance at motherhood and making up for the years that she lost with her own family while she was grieving the loss of Ellie.

More summaries and resources for teaching or studying Then She Was Gone.

Then She Was Gone from BookRags. (c)2022 BookRags, Inc. All rights reserved.