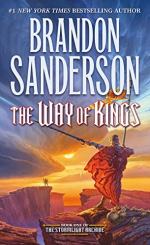 Brandon Sanderson
This Study Guide consists of approximately 167 pages of chapter summaries, quotes, character analysis, themes, and more - everything you need to sharpen your knowledge of The Way of Kings.

The Way of Kings Summary & Study Guide includes comprehensive information and analysis to help you understand the book. This study guide contains the following sections:

This detailed literature summary also contains Quotes and a Free Quiz on The Way of Kings by Brandon Sanderson.

The Way of Kings follows the journeys of three different narrators, Kaladin, Dalinar, and Shallan. Kaladin is a slave who has been transported to the Shattered Plains to serve as a bridgeman in Highprince Sadeas’ army. Through a series of flashbacks, readers learn that he was once the son of a surgeon before he and his brother were forced into the army, where his brother was killed. That death pushed Kaladin to become an elite soldier but he is betrayed by a high-ranking man and made a slave. Kaladin comes to the Shattered Plains with little hope of escape but slowly, with the help from a windspren named Syl, he comes to realize that he must try to truly live again. He wins the loyalty of Bridge Four and trains them in the ways of the army, making them the best bridge crew. Kaladin also discovers that he has control over Stormlight and that it allows him to complete incredible feats in order to save his fellow bridgemen. The crew eventually throw away their chance to escape in order to help Dalinar Kholin and his army survive and are then offered to become Dalinar’s honor guard.

Dalinar Kholin is a highprince of Alethkar and the uncle to the king of Alethkar. He has begun to have a distaste for war and he craves peace instead. Throughout the novel, he tries to unite the highprinces and act with honor in every situation. Dalinar begins to have visions during highstorms and many believe that he is going mad and take his visions as a sign of weakness. Dalinar believes that they are sent from the Almighty and that is why he must unite Alethkar. Dalinar is betrayed by Highprince Sadeas at the end of the novel and he and his army are left to be slaughtered. However, Dalinar is rescued by Kaladin and Bridge Four. He then trades his revered Shardblade for the freedom of all of the bridgemen Sadeas has. Dalinar also finds out that his visions are truly from the Almighty and that he is a being that has been dead for quite some time now.

Shallan Davar is a noble, light eyed woman from Jah Keved who is incredibly persistent in her pursuits. She tracks down and begs renowned scholar Jasnah Kholin, who is currently studying the Voidbringers, to become her ward. Eventually Jasnah gives in and allows Shallan to work with her. However, Shallan has an ulterior motive of stealing Jasnah’s Soulcaster so that she can restore wealth to her family in Jah Keved. Throughout the novel, Shallan becomes increasingly conflicted about stealing the Soulcaster as she comes to respect Jasnah. She does steal it though when Jasnah murders four robbers. Shallan discovers that she can Soulcast, which lands her in the hospital. In the hospital, Shallan is poisoned and has to tell Jasnah that she stole her real Soulcaster in order to be saved. Jasnah saves her and Shallan comes to realize that Jasnah’s Soulcaster is fake and that the both of them can Soulcast without it’s help. Shallan pleads with Jasnah to teach her how to properly Soulcast and a reluctant Jasnah agrees. At the end of the novel, Jasnah and Shallan discover that the Voidbringers they fear so much are actually the parshmen servants that permeate every facet of society on Roshar.

More summaries and resources for teaching or studying The Way of Kings.

The Way of Kings from BookRags. (c)2022 BookRags, Inc. All rights reserved.