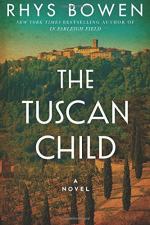 Rhys Bowen
This Study Guide consists of approximately 61 pages of chapter summaries, quotes, character analysis, themes, and more - everything you need to sharpen your knowledge of The Tuscan Child.

This detailed literature summary also contains Quotes and a Free Quiz on The Tuscan Child by Rhys Bowen.

The following version of the novel was used to create this study guide: Bowen, Rhys. The Tuscan Child. Lake Union Publishing, February 20, 2018.

In The Tuscan Child by Rhys Bowen, a daughter’s search for the truth about her father’s service in World War II leads to love between herself and the son of her father’s savior as well as the discovery of a priceless piece of art kept safe from the Germans by her father. Considered historical fiction because parts of the novel are set during World War II, The Tuscan Child features Hugo Langley, an English aristocrat and bomber pilot shot down over the village of San Salvatore in German-controlled territory, as he tried to survive a serious injury and remain hidden from the enemy, and Sofia Bartoli, the Italian girl who risked her life to help him survive.

The novel alternates between December of 1944 when Hugo’s plane was shot down and 1973, the year of his death, when Hugo’s daughter, Joanna, learned that her father had fallen in love with Sofia, an Italian girl during the period of time he was fighting with the Allies. Joanna learned from a letter from Hugo to Sofia, that had been returned unopened to Hugo, that her father wanted to marry Sofia. A reference to a “beautiful boy” (61) in the letter led Joanna to believe that perhaps Sofia and her father had a child together.

Hugo’s parts of the novel describe how he survived his injury and exposure to the elements with the help of Sofia. Hugo found shelter in the ruins of a monastery that had been bombed by the Allies after the Germans set up a stronghold there. Because both Sofia and Hugo were art lovers, they mourned the way the Germans had looted the monastery of its sculptures and paintings. After a bombing near the monastery, Sofia and Hugo were surprised when stairs leading to a basement were uncovered. They discovered several statues and paintings in this hidden chapel. Also in the chapel was the most beautiful painting of the Virgin Mary and the Baby Jesus that either Hugo or Sofia had ever seen. Hugo hid the portrait behind a locked door that led to a blocked hallway in hopes that the Germans would not be able to find it and steal it. Hugo was captured by the Germans but was able to escape.

Feeling guilty because she had not seen her father in more than a year, Joanna decided to look for Sofia, hoping that she could bring some closure to that story. Joanna traveled to San Salvatore, the village where she believed Sofia had lived but people were unwilling to talk to her. They would say only that they had seen Sofia riding away with a German soldier and assumed that she had gone with them willingly. She was not thought of well because she abandoned her young son when she left.

Joanna realized there was something suspicious going on when Gianni Martinelli, a man who offered to tell her what happened to her father and Sofia, was murdered and his body left in the well that served the room where Joanna was staying. Local police suspected Joanna was responsible for the crime. Meanwhile, Joanna was introduced to Renzo di Georgio, Sofia’s biological son and the adopted son of Cosimo di Georgio, the richest man in San Salvatore. Joanna collected from Renzo’s age that he could not have been the son of her father and Sofia. Renzo recognized a signet ring that Joanna wore and accused her of having stolen the ring from him. Renzo began to believe Sofia’s story when he went home and found his ring. He discovered that the initials of Joanna’s father were carved inside the ring. The ring proved that Hugo had been in the village and that he had given the ring to Sofia.

As Joanna learned more about what had happened in San Salvatore during the war, she became suspicious that Cosimo had been responsible for planning and paying the Germans to massacre the area’s group of partisans. Joanna believed the incident was suspicious because Cosimo had been the only one to survive the massacre. He had also profited from the tragedy because he bought up all of the land once owned by the men who were killed.

Meanwhile, Cosimo arranged with police for Joanna to be allowed to leave the country and arranged for her to leave quickly. Before Joanna left, Renzo, who admitted he was falling in love with Joanna, took her to visit the ruins of the monastery. She suspected perhaps her father had taken shelter there. While they were at the monastery, there was an earthquake that reopened the stairway to the basement. Joanna and Renzo discovered the painting that Hugo had hidden nearly 30 years prior. They realized that had been the “beautiful boy” (61) to which Hugo had referred in his letter.

Cosimo confronted Renzo and Joanna at the monastery, threatening to shoot Joanna because she had been asking too many questions. Joanna accused him of having arranged the death of the partisans at the hands of the Germans. Before Cosimo could shoot Joanna, an aftershock collapsed part of the ruins, killing Cosimo. Renzo told Joanna that he had suspected his father had been part of some things that were not right, like Gianni’s murder, but realized he also responsible for the deaths of his fellow partisans because of greed.

A final question in the novel concerning what happened to Sofia was answered by the former parish priest who called Renzo and Joanna to his bedside as he was dying. He told them that he had to confess that he had been responsible for betraying Sofia. Sofia had told him she was helping take care of an English soldier during confession. When the Germans asked the priest if he had any information about the English soldier, he was told that he could either give them the name of the person helping that man or the entire village would be killed. The priest had made the decision to sacrifice Sofia in order to save the rest of the people.

More summaries and resources for teaching or studying The Tuscan Child.