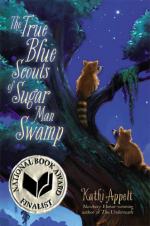 Kathi Appelt
This Study Guide consists of approximately 111 pages of chapter summaries, quotes, character analysis, themes, and more - everything you need to sharpen your knowledge of The True Blue Scouts of Sugar Man Swamp.

This detailed literature summary also contains Quotes and a Free Quiz on The True Blue Scouts of Sugar Man Swamp by Kathi Appelt.

The True Blue Scouts of Sugar Man Swamp is the tale of an unlikely mix of characters banded together in their own ways to save their beloved swamp from destruction.

Bingo and J'miah are raccoon brothers who are the new Information Officers of the Swamp Scouts. They arrive at the Information Headquarters and Bingo immediately wants to start climbing trees, while J'miah thinks about his fear of heights. Bingo climbs up a tall pine tree to discover a red flashing star low in the sky that he names Blinkle. Meanwhile, 12-year-old Chap Brayburn is mourning his recently deceased Grandpa Audie and wondering how he will ever have enough cash to pay the increasing rent to Sonny Boy Beaucoop, who increased the rent so high that Chap and his mother will be forced to leave their home. Sonny Boy is an extremely greedy landowner who is making plans to sell the swamp to World Champion Gator Wrestler Jaeger Stitch so that she can build a gator wrestling arena.

While in the Information Headquarters, Bingo and J'miah hear the sound of rumbling in the distance. The Brayburn's cat, Sweetums, hears it also and tries to warn whoever he can. Eventually the Scouts hear this noise as well and they know whatever is coming could really hurt the swamp. They decide they need to wake up the Sugar Man to get his help, but they have no clue where he is. In the meantime, Sonny Boy is making plans to kick the Brayburns from their home. He says that he will reconsider and give Chap the entire swamp if Chap brings proof of this elusive creature or if he gets a boat full of cash. Jaeger Stitch is Sonny Boy's business partner and gator wrestling champion with ideas that she is going to open a theme park in the swamp.

As these things are going on, Buzzie and Clydine Farrow, leader of a notorious family of wild hogs, decide that they have a craving for sugar cane. They charge through the swamp lands, destroying everything in their path. The Voice of Intelligence warns Bingo and J'miah about this group during a transmission and they figure out the rumbling sound is coming from them. They decide that they have no choice but to go on an extremely important and dangerous mission, to wake the Sugar Man. The brothers set off to find the Sugar Man but instead run into his personal assistant, the rattlesnake Gertrude. She tells them that they need to get sugar cane to gently coax the Sugar Man into waking so he does not wake up in a nasty mood and throw things. Bingo and J'miah go to the sugar cane fields, but they find none as Chap Brayburn has already taken most of the sugar cane back to the cafe.

The Voice of Intelligence is helpful once again when it instructs the Swamp Scouts to go to the Paradise Pies Café. They steal many pies, but they eat most of them before they can get back to the Sugar Man's lair. They are left with one to give the Sugar Man, but Gertrude eats it. She takes pity on the scouts and wakes the Sugar Man up herself. This is just in the nick of time, since the Farrow Gang has just arrived in the swamp. During all of this, Sonny Boy and Jaeger prepare for the groundbreaking ceremony for the amusement park. Sonny Boy totally disregards Chaps hard work in obtaining the boatload of cash that Sonny Boy asked for. They gather important people from the town together and begin, but in the swamp something else is going on. The Farrow Gang has invaded the canebrake and is eating all the sugar cane.

Sonny Boy takes the group of people he has assembled down towards the canebrake, but they are stopped by a massive horde of rattlesnakes led by Gertrude. The Sugar Man saves the swamp by grabbing the Farrow Gang and throwing them as hard and as far as he can. Once this is finished the Sugar Man and Chap run into each other and they become friends. Later, Chap searches the forest for some sort of proof that the Sugar Man exists because he knows that just because Jaeger Stitch cannot build in the swamp, that does not mean Sonny Boy will save the swamp from sale to someone else. As he is walking, he finds the 1949 DeSoto that Granpa Audie lost. Chap inspects the car and finds 3 Polaroid pictures inside. Chap knows that the picture Audie had taken of the Sugar Man is just the thing he needs to save the swamp. Chap decides against this, as he feels that Audie was right in saying that any proof of the Sugar Man would only lead to trouble and the possible destruction of the swamp once humans start hovering around wanting to do research or constantly be in the way.

To make matters worse for Sonny Boy, when he gets home, he decides to burn Alouicious' oath and during it he hears the Farrow Gang crash into the ground. He is convinced that the wrath of the Sugar Man is upon him and he wants out of there. Before Sonny Boy leaves the swamp, he signs a document in his own blood giving the entire area to Chap, thereby saving the whole swamp. Bingo and J'miah go out to wish on Blinkle for more sugar pies as J'miah has realized that he has gotten over his fear of heights. They go to the cafe, but they see a trap has been set to catch the raccoons so head to the crawdad hole. When they return, they find home almost exactly as they left it. They know that a human has been inside the Information Headquarters and that the pictures were touched. They are mad only for an instant when they see that the human has left something for them. The brothers forgive the human as they see that they got exactly what they wished for, more sugar pies.

More summaries and resources for teaching or studying The True Blue Scouts of Sugar Man Swamp.