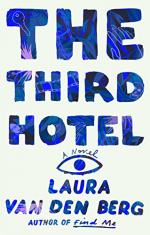 This detailed literature summary also contains Quotes and a Free Quiz on The Third Hotel by Laura van den Berg.

The following version of this book was used to create the guide; van den Berg, Laura. The Third Hotel. Farrar, Straus and Giroux, 2018.

Van den Berg divides her novel into three parts, "The Fingernail", "Morbid Urges" and "Laws Unknown". Each part contains 7-12 small chapters varying in length. Each chapter switches between the present, Clare in Havana, and the past, Clare's memories of her childhood, her marriage, and her husband's death, and her travels.

The novel begins in Havana, Cuba, where Clare traveled to attend a film festival for one week in December 2015. On the third day of her trip, Clare saw Richard, her late husband, standing outside of a museum. She approached Richard, but he led her on a dizzying chase through the museum. The chase ended when he jumped on a motorbike and sped through the busy streets, leaving Clare stunned and confused.

The main reason Clare came to Havana was to watch the first Cuban-made horror movie, Revolucion Zombi. Richard, a films studies professor with a specialty in horror movies, was particularly excited about this film. While watching the film for the first time, Clare felt an eel slithering under her skin. She ran to the bathroom and stood by the door for the rest of the film, too uncomfortable in the director's version of horror.

On the fifth night, Clare finds herself at a reception in the festival hotel lobby. There she saw Davi, a film critic next to whom she sat next on her flight, and Arlo, a festival representative who escorted her to her hotel on the first night. They invited Clare to go to an art exhibit with them. While there, Clare is mistaken for a woman named Liesel. This interaction left Clare with the same eel sliding around her intestines and feeling very disoriented.

Clare packed up her belongings and headed to the airport to go home. While at the airport, Clare ran into Davi, the critic. Once again, a seemingly convenient full circle moment. Davi and Clare sat down over coffee before their flights took off. Davi asked Clare what her plans for the holidays were. While Clare thought of how to describe her ideal of living in an airplane, a dog scuffled over her feet, causing her to jump and knock her coffee all over Davi. When Davi excuses himself to the restroom, Clare gathered her bags and headed back to the third hotel.

Clare checked into her old room at the hotel, lying about why she did not return to New York. While waiting to exchange American dollars to pesos, she saw Richard on the street corner buying a mango. Clare followed him to a small apartment, where she watched him through his window. She watched him eat a mango while reading a book.

In the beginning of part two, Clare found Richard at a cafe being watched by a man with a flaxseed mustache and her father’s forehead. Clare studied Richards’ habits: drinking at a cafe, disappearing into a hospital, and eating in a park and drinking in a bar before retiring back home. A few days after beginning her surveillance, Richard noticed Clare sitting in the cafe and approached her. After he said her name, Clare went to vomit in the cafe bathroom from the shock and confusion.

After visiting a professor at a local university about the afterlife, Clare broke into Richard’s apartment and hide in the closet all night watching him. In his room, she found a train ticket to Cienfuegos. Clare followed him onto the train the next morning, trapping him in the front most car. Richard gave Clare a note in passing that included a hotel room and a meeting time.

After reaching their destination, Clare and Richard met in the agreed upon room. There they had their first discussion since his death. They agreed they needed to look less like themselves, so they cut their hair in their hotel bathroom. After, they went to bed together like husband and wife once again. Clare awoke in the middle of the night and attacked Richard. He threw Clare off him and left the room.

In part three, Clare chased after Richard. She followed him onto a dirt path that led to a cave. They walked through the cave to the other entrance where a river waited. Richard waded into the water, ignored Clare’s next comments, and let himself get swept away over the falls. Clare followed over the drop. When she emerged from the river, Richard was gone.

On her return home, Clare stopped in Florida to visit her parents. She had no job to return to, after being absent with no contact for more than two weeks. Clare moved from New York to Florida to live with her parents before her eventual father’s passing.