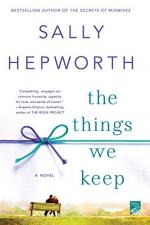 The Things We Keep: A Novel Summary & Study Guide

The Things We Keep: A Novel Summary & Study Guide Description

The Things We Keep: A Novel Summary & Study Guide includes comprehensive information and analysis to help you understand the book. This study guide contains the following sections:

This detailed literature summary also contains Quotes and a Free Quiz on The Things We Keep: A Novel by Sally Hepworth.

The following version of this book was used to create this study guide: Hepworth, Sally. The Things We Keep. St. Martin's Press, 2015. First Edition.

The Things We Keep is narrated from three different perspectives:,Anna Forster, a recently diagnosed early-onset Alzheimer's patient; Eve; and Clementine Bennett, the widow and daughter of a corrupt business man.

Switching between the past and the present, this novel begins with Anna moving to Rosalind House, an assisted care living facility. After accidentally letting her nephew get injured on her watch, Anna agrees that this will be the best place for her, despite her misgivings. At Rosalind, Anna meets Luke, a young dementia patient who is slowly losing his ability to speak. Although, Anna does not plan on being at the facility long, there is an uncommon bond forged between the two of them in the first days that she is there.

Anna’s memory declines fast at Rosalind, but she still is able to keep her strong will. She fails at attempting suicide, as Luke is able to convince her otherwise, and they become very close, entering a romantic relationship. Anna and Luke are in love, and want to stay with each other until the end. Their families, however, are not receptive. Jack, Anna’s brother and primary family caretaker, is unhappy with the arrangement and believes that Anna might being doing things against her will. By the time that they are having this discussion, Anna’s Alzheimer’s has progressed significantly to the point where she can no longer remember basic facts about her current life and has a hard time keeping up with conversations. When Anna and Luke are found in bed together, the staff at Rosalind decides (with Jack’s encouragement) that they should be locking their doors at night and keeping the two of them apart.

Jack finds out that Anna has become pregnant. When he tells her, she is astounded, but also very happy to be pregnant. In her life before Alzheimer’s, her husband Aiden never wanted to have children. She felt stagnant in that life, and so, when she was diagnosed with Alzheimer’s, she left him. And now that she is pregnant, she is much happier. Jack goes to talk to the management of Rosalind house about this, leaving Anna in her room by herself. Anna goes to find Luke, to tell him the news, but ends up on the roof of the building. Not having good depth perception, or the ability to know what is going on, Anna steps off the roof, and hurts herself, killing the embryo.

In the present day, after all these events have occurred, a new cook/housekeeper is hired at Rosalind. Her name is Eve Bennett and she is the wife of Richard Bennett, a man who committed suicide to get out of a ponzi scheme that cost many people terrible financial loss. Eve, particularly, wants to be at Rosalind so her daughter Clementine can stay at the same school. Clementine is used to living a wealthy lifestyle, and is not used to this new arrangement.

Eve is struck by Anna when she meets her on the lawn at Rosalind. Anna mumbles, “help me,” when Eve greets her, and this remains in Eve’s mind throughout her time cooking and cleaning at Rosalind. She tries to get as much information as she can about Anna in the hopes that she might be able to help her. Eve finds that the staff in the facility do not want to help Anna, and, in fact, on some occasions, sedate her when they think she is too difficult to deal with.

Eve’s personal life is in shambles. She is not accepted among the parents at the school, and one girl in Clementine’s class has taken a liking to hurting Clementine with information about her father.

Eve is also accosted at the supermarket for Richard’s scheme and knows that she is not liked within the community. Angus, the gardner at Rosalind, helps Eve out of the situation at the supermarket, and the two of them share some intimate moments together. They end up dating, to Clementine’s initial dislike.

Clementine is encountering a hard time at school. Not only because of the girl in her class who is teasing her about her father, but also because of other aspects, like the family dance, which she went to last year with her father. She ends up suspended from school because of her attack on her classmate when the classmate provoked Clementine by saying mean things about her parents. By the end of the story, Clementine switches to a new school district that is much better for her.

Clementine finds solace in the other residents of Rosalind, especially Bert. Bert is a dementia patient who believes his first wife Myrna is still around; he talks to her and saves seats for her as well.

While working late one night at Rosalind, Eve finds Anna in her room, and helps her to go to Luke’s room. She commits to doing this regularly, although she does get chastised for this from the manager, Eric. One night, when Eve helps Anna into Luke’s room, there is a commotion, and Clementine, with good intentions, tells Eric about what her mom is doing, and Eric fires Eve. However, Eve can still not get Anna out of her head. She visits Jack in order to try and make him see what he is keeping Anna from. Eventually, Jack concedes that Luke makes Anna happy, and Anna and Luke move into a suite together.

The Things We Keep: A Novel from BookRags. (c)2022 BookRags, Inc. All rights reserved.