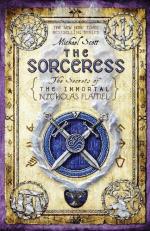 In Chapter Thirty-Four, Dee and those on the other side of the moat exchange threatening words, but when the two swords are drawn to each other, Josh can read the fear, anger, and desire in Dee's mind. He also sees Dee's plan to kill the Archon. Through the focusing of Josh's aura, he is able to remove Excalibur from Dee's hands, but Dee is not done. He soon sets a terrible rain on the junkyard.

In Chapter Thirty-Five, Nereus captures Perenelle in his tentacles.

In Chapter Thirty-Six, Palamedes decides it is time to flee, Will out of London and the twins to the King, which could be dangerous. Before leaving, Palamedes and Nicholas aid Shakespeare in creating various creatures using his imagination; these are for the Wild Hunt. As the car pulls away, the Horned...