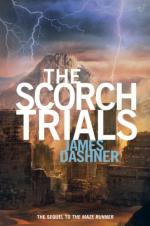 James Dashner
This Study Guide consists of approximately 33 pages of chapter summaries, quotes, character analysis, themes, and more - everything you need to sharpen your knowledge of The Scorch Trials.

This detailed literature summary also contains Quotes and a Free Quiz on The Scorch Trials by James Dashner.

"The Scorch Trials," a young adult novel, is the second installment in James Dashner's Maze Runner Series. It deals with the events surrounding the lives of Thomas, Teresa, and the other survivors immediately following the events of the Maze in the first installment.

Thomas, Teresa, and the other Gladers, having been rescued by the Maze, are put into dormitories for the night. When they awaken, Teresa has been separated and replaced by Aris, from another Maze group, the rescuers are dead, and there are Cranks struggling to get in. A representative from WICKED announces they are about to face the Scorch Trials, and will have two weeks and no rules to reach the safe haven one hundred miles north of their starting location.

Thomas and the other Gladers encounter deadly traps, Cranks, and the group of girls of which Aris was formerly a part as they struggle to get across a scorching desert, through a city, and over the mountains beyond the city. Thomas's group brings along Jorge and Brenda, two early-stage Cranks, who agree to help them get through the city in exchange for a shot at getting a cure. However, Teresa betrays Thomas, breaking his heart, by being willing to kill him as WICKED has instructed her to do. This destroys the feelings that Thomas has had for her, even though Thomas does not die. Teresa tells him she would have gladly sacrificed anything between them to make sure he is still alive. When they make it through the Scorch trials, Thomas is separated from Teresa, who attempts to converse with him telepathically. Thomas tells her to leave him alone, and Teresa tells him WICKED is good.

More summaries and resources for teaching or studying The Scorch Trials.