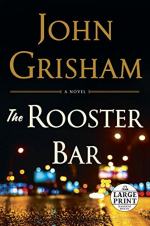 This detailed literature summary also contains Quotes and a Free Quiz on The Rooster Bar by John Grisham.

The following version of the novel was used to create this study guide: Grisham, John. The Rooster Bar. Doubleday, Oct. 24, 2017. Kindle.

In The Rooster Bar by John Grisham, law school students Mark Frazier and Todd Lucero decided to fight back against the for-profit law school and student loan system that they believed had lied about their chances at profitable jobs and left them with loads of debt. Zola, who faced her own nightmare when her immigrant family was scheduled for deportation along with law school and student debt stress, went into hiding with Mark and Todd because she was afraid she would be deported even though she was an American citizen. With fake names, the three hustled law clients in courtrooms and hospitals even though they did not have licenses to practice law. Their disorganized plan was soon discovered and the three are charged with their crimes but they are not located before they managed to scam the man whom they believed was responsible for their problems and disappear out of the country.

During Christmas break before their last semester of law school Mark, Todd and Zola bonded together to help their friend Gordon “Gordy” Tanner when he stopped taking his medication for bipolar disorder. Gordy had done research on Foggy Bottom Law School, the school they were attending and had discovered that it was owned partially by Hinds Rackley, a man who was getting rich off it and seven other for-profit schools he owned. Gordy additionally uncovered that Rackley partially owned four law firms that would hire graduates from Foggy Bottom at good initial salaries. Gordy interviewed one of these students and learned that he had quit his job because his salary was decreased each year. Yet that same student was featured on Foggy Bottom propaganda enticing students to attend that school. Because of the combined pressure of finishing law school, facing the bar exam, paying back student loans, facing a fiancée he was not ready to marry and stopping his medication, Gordy was depressed. His friends tried to keep him safe but he snuck away from them and committed suicide.

In the wake of their friend’s death, Mark and Todd did not feel emotionally or mentally strong enough to finish their classes and study for the bar exam. They believed the research Gordy had shown to them and soon began to feel they had been tricked. In order to hide from their debts and financial responsibilities, Mark and Todd decided to adopt aliases and practice law even though they did not have licenses. Because Zola was afraid she would be arrested, like her parents had been and threatened with deportation even though she was an American citizen, Zola joined them in hiding. Because they did not know what they were doing and had no firm plan, the three soon got into trouble and were ousted with their fake law scam.

At the same time, they began working on a scheme to directly scam Rackley. Gordy had a suspicion through his research that Rackley also owned a portion of Swift Bank. That bank was caught up in a class action lawsuit for opening accounts in customers’ names without their consent or knowledge and then charging fees for those accounts. The three fabricated thirteen hundred false Swift customers whose names they added to the class action suit. Using Gordy’s research as leverage, they approached Rackley to encourage him to settle the Swift case quickly. They told him that if he would settle the case, they would not share the information they had on him with the New York Times. Rackley agreed but also alerted the FBI that there was suspicion of fraud in the lawsuit.

Zola had already joined her parents in Senegal to help with their transition back to their native country. Todd traveled to Barbados to prepare a cover for himself and Mark while Mark waited in the United States for money from the Swift Bank settlement. He wired the money overseas and the left the country himself before the FBI was able to catch up with him. Zola, Mark and Todd became Senegalese citizens under fake identifications. They lived in the tourist community of Saint-Louis where they operated a bar called The Rooster Bar, an homage to the bar in D.C where they had lived and worked during a good portion of their time as fake lawyers.