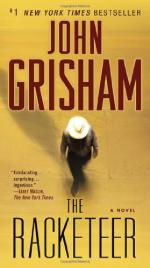 The Racketeer Summary & Study Guide includes comprehensive information and analysis to help you understand the book. This study guide contains the following sections:

This detailed literature summary also contains Topics for Discussion on The Racketeer by John Grisham.

"The Racketeer" by John Grisham is a tale of revenge and greed. Malcolm Bannister finds a way to gain a fortune at the expense of the federal government.

Malcolm Bannister is a forty-three year old lawyer serving a ten year sentence for money laundering. Malcolm continually proclaims his innocence in the crime for which he was convicted and blames the FBI for his wrongful incarceration. When Judge Raymond Fawcett is murdered along with his secretary, Malcolm sees his opportunity to gain his freedom.

Using Rule 35, which declares that if a prisoner helps solve a federal crime then he can have his sentence reduced, Bannister bargains with the FBI. He claims to know the identity of the Judge's killer and is willing to divulge the information in exchange for his freedom, reward money and witness protection. The federal government agrees to his demands and he tells them that Quinn Rucker had motive to kill and rob the judge. Fawcett had taken a bribe from Rucker in the form of half a million dollars in exchange for letting Quinn's nephew off on a drug charge. The judge took the money, but sentenced the boy to prison time. Rucker vowed to get revenge.

The FBI coerce a confession out of Rucker and when he is indicted for the murder of Judge Fawcett and his secretary, Naomi Clary, the FBI release Malcolm from prison. He is given plastic surgery, a new name, Max Reed Baldwin, a place to live in Jacksonville, Florida and the reward money of $150,000. Once he obtains his freedom and the money, Malcolm begins to deviate from the plans the federal government has for him and begins to follow his own agenda. He refuses the job they have for him. He travels to the Caribbean, Jamaica and Antigua.

As Max Reed Baldwin, he creates a fake film company and he tracks down a man named Nathan Cooley. With the help of a woman named Vanessa Young, the sister of an ex-fellow inmate, with whom he reunited once he was out of prison, they convince Cooley they are filming a documentary on the Drug Enforcement Agency and the people they have wrongfully killed in the line of duty. Nathan's brother, Gene, was shot and killed by DEA agents during a drug bust.

After filming is complete, they convince Nathan to come to Miami to meet the investors. Once he is on the plane, however, Max gets him drunk, drugs him and plants cocaine and a handgun on him. He takes him to Jamaica instead of Miami. When they land Nathan is arrested and put into a Jamaican prison. Desperate to get out he tells Max the location of a cache of gold bars he has. He promises him half if he uses some of it to get him out of prison.

Vanessa finds the gold and together she and Max stash it away in various bank safety deposit boxes. Max then tells the FBI that he cannot testify against Quinn Rucker after all. He can tell them the name of the real killer, but he demands immunity. In the meantime, Vanessa has provided Quinn's lawyer with evidence that he was in a rehab center in Akron, OH at the time of the murders. It turns out that she is Quinn's sister.

Max tells the FBI that he does not know the whereabouts of the gold. Victor Westlake, the lead FBI agent in charge of the judge's murder suspects that Max engineered the entire scheme in order to to be released from prison and to get the gold from Nathan Cooley. He cannot prove it, however, and they have agreed to give Max immunity.

Quinn is released from prison. Vanessa and Max retrieve the gold from the safety deposit boxes and then meet up with Quinn and his brother, Dee Ray. After a portion of the gold is given to Dee Ray for his contributions in helping to set up the plan the rest will be divided amongst the other three, who had the largest roles in the plot, which has been several years in the planning. When Nathan told Malcolm Bannister about the gold he knew the judge was keeping in his safe and he was going to get it someday Malcolm saw the opportunity to gain his own freedom and untold wealth. Through his plan he was also able to make the FBI look foolish and take millions of dollars of gold from under their noses without them being able to do anything. He even had them give him plastic surgery at their expense in order to trick Nathan Cooley.