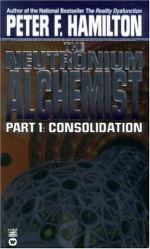 Peter F. Hamilton
This Study Guide consists of approximately 45 pages of chapter summaries, quotes, character analysis, themes, and more - everything you need to sharpen your knowledge of The Neutronium Alchemist Consolidation.

This detailed literature summary also contains Topics for Discussion and a Free Quiz on The Neutronium Alchemist Consolidation by Peter F. Hamilton.

Captain Joshua Calvert and the Lady Mac have just rescued Kelly Tirrel, Father Horst, and children of Aberdale children from Lalonde. The epicenter of the possession outbreak is now under complete control by the returning dead, and is enshrouded in the red cloud they use to hide themselves. Joshua returns to Tranquility, where Ione Saldana asks him to track down the escaped Dr. Alkad Mzu, who escaped from her long captivity on the Blackhawk Udat and is expect to attempt to recover the dreaded weapon, the Alchemist, and use it on the Omurtan homeworld. Louise Kavanaugh, her sister Genevieve and possessor Fletcher Christian escape from Norfolk and pursue the evil Quinn Dexter to the Sol system. Throughout the Confederation, new leaders like Kiera Salter, Annette Ekelund and the 20th century gangster Al Capone take charge of the forces of the possessed, infecting and consuming planet after planet.

Joshua Calvert, whose starship the Lady Mac is the only ship to return from the mercenary fleet's assault on Lalonde, is asked by his lover Ione Saldana, the Lord of Ruin and ruler of the bitek habitat Tranquility, to track down and capture or eliminate rogue scientist Dr. Alkad Mzu. It has been thirty years since the Omurtans wiped out Mzu's homeworld, but Ione and the Confederation believe that Mzu will recover the Alchemist, a devastating weapon of unknown abilities that she invented during the war, to exact revenge upon the Omurtan home world.

Mzu, having escaped from Tranquility on the Blackhawk Udat, sabotages her rescuers and boards another starship for the Dorados asteroid cluster, where she meets with a group of Garissan loyalists. The elder loyalists, remnants of Mzu's original mission to use the Alchemist on Omurta, fail to support her and are caught by Confederation and Edenist agents. Mzu slips away, aided by a group of younger loyalists led by a young Garissan named Voi.

On Valisk, the Rubra control personality, the artificial intelligence that controls the habitat, is unable to stop the forces of the possessed, lead by Kiera Saltera, from converting most of the habitat's population. Rubra begins a campaign of sabotage of his own systems, while at the same time attempting to sway Dariat, a descendant of the real Rubra, and a man affinity-linked to the Rubra personality, to change sides and help defend the habitat. However, Dariat blames Rubra for the death of his first love, Anastasia, and has sacrificed himself in order to return as one of the possessed and help Kiera eradicate the Rubra A.I. Kiera Saltera, in an attempt to draw more people to Valisk for possession, makes a series of propaganda recordings that paint the habitat as a paradise free of the doldrums of Confederation life. The recordings, which becoming known as the Deadknight fleks, entice many Confederation citizens, especially the young, to break the quarantine and smuggle themselves to Valisk. Once there they are tortured and possessed.

Louise Kavanaugh has escaped from her home world of Norfolk, accompanied by her young sister Genevieve and the valiant possessor Fletcher Christian. After a brush with Quinn Dexter on the way off the planet, Fletcher Christian becomes obsessed with the Satanist leader and tells Louise that Dexter, who is more evil than the possessed, must be stopped. Dexter has escaped from Norfolk as well, hijacking a navy battleship and flying it to Earth, only to be rebuffed and force to flee by Sol system security.

20th Century gangster Al Capone possesses the body of a New California man and, with the help of the growing population of possessed on the planet, takes over the government, forming an Organization that quickly takes control of the surrounding space. He allies himself with the ruthless and knowledge diva Jezzibella and, having seized a source of powerful and valuable anti-matter, they build a fleet and begin flexing their might against the Edenists and the Confederation.

More summaries and resources for teaching or studying The Neutronium Alchemist Consolidation.