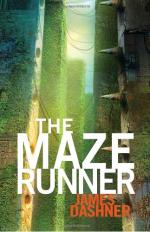 With three Grievers ahead of him and one still pursuing him from the rear, Thomas knew it was over. He decided to go down fighting. Thomas charged the one who was pursuing him, screaming at it at the top of his lungs. Just as the Griever was about to attack him, Thomas was able at the last minute to move out of its path. The Griever plunged forward. Thomas ran down the Maze's corridors as the four Grievers were now pursuing him. Suddenly, he was yanked into an adjoining hallway. It was Minho. He had watched as Thomas averted the Griever. They ran down the corridors together. Minho told Thomas they only had to last a little while longer. But, the Grievers were gaining on them.

Finally, they turned into a corridor that ended in total blackness. It was the end...