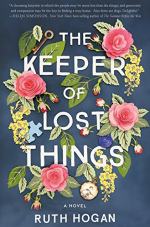 Ruth Hogan
This Study Guide consists of approximately 40 pages of chapter summaries, quotes, character analysis, themes, and more - everything you need to sharpen your knowledge of The Keeper of Lost Things.

The Keeper of Lost Things Summary & Study Guide includes comprehensive information and analysis to help you understand the book. This study guide contains the following sections:

This detailed literature summary also contains Quotes and a Free Quiz on The Keeper of Lost Things by Ruth Hogan.

The following version of this book was used to create this Study Guide: Hogan, Ruth. The Keeper of Lost Things. Harper Collins. 2017.

The Keep of Lost Things by Ruth Hogan tells the story of Laura, a woman who works for Anthony, an author, who leaves Laura his estate on one condition. Laura must try to reunite as many people with their lost items as she is able to. Anthony also wants to be reunited with his fiancée Therese who was killed in an accident years earlier.

Laura is divorced from Vince, a man she met in high school. Working for Anthony gave Laura purpose, but now that Anthony has died, Laura is unsure what to do. Laura is unaware that Anthony collected items he found for many years and kept them locked in his study. After Anthony passes away, Laura learns about the contents of the study. The thought of finding the people who lost the items is a daunting task, but Laura has help from Freddy, the gardener, and Sunshine, the girl who lives across the street.

Sunshine has a special gift for being able to sense the backstory of the belonging when she touches it. Some of the items cause Sunshine pain as she learns about the people. Sunshine helps to plan a ceremony to spread Anthony’s ashes and reunite him with Therese. As time passes, Laura begins to sense that Therese wants more. Laura begins to hear music playing on a gramophone, finds items relocated in the house, and discovers the door to Therese’s room locked from the inside. Laura, Freddy, and Sunshine all try to figure out how to make Therese happy and be reunited with Anthony.

Parallel to Laura’s story in the present, Eunice takes a job as an assistant to Bomber, a publisher. Eunice falls in love with Bomber. The two become very close, but Eunice knows there will never be more to their relationship because Bomber is gay.

Bomber has a tense relationship with his sister Portia who wants to be a writer. Bomber is frustrated by Portia’s writing style, finding it very derivative of famous novels. After Bomber’s father Godfrey dies, Bomber’s mother tells Bomber that she knows he is gay and wants him to be safe. As Bomber ages, he develops dementia like his father Godfrey had. Bomber is eventually put in a nursing home where Eunice continues to look after him. When Bomber tells Eunice he does not want to live anymore, Eunice helps Bomber to die.

Eunice loses Bomber’s ashes on the train to Bristol, which Anthony finds. Eunice visits Laura and is reunited with Bomber’s ashes. Eunice also gives Laura Therese’s communion medal, which Eunice found the day of her interview with Bomber, which was the same day that Therese was killed in an accident.

Therese’s ghost celebrates when the communion medal is returned. Eunice is able to spread Bomber’s ashes, having never thought it would be possible. Laura and Freddy get engaged and continue to run the website to reunite people with their belongings, along with Sunshine’s help. Laura decides to pursue her dream of becoming an author. She begins writing Anthony’s story of the lost items.

More summaries and resources for teaching or studying The Keeper of Lost Things.

The Keeper of Lost Things from BookRags. (c)2022 BookRags, Inc. All rights reserved.