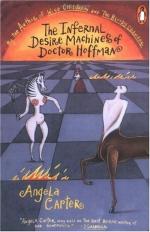 Angela Carter
This Study Guide consists of approximately 33 pages of chapter summaries, quotes, character analysis, themes, and more - everything you need to sharpen your knowledge of The Infernal Desire Machines of Doctor Hoffman.

The Infernal Desire Machines of Doctor Hoffman: A Novel Summary & Study Guide includes comprehensive information and analysis to help you understand the book. This study guide contains the following sections:

This detailed literature summary also contains Topics for Discussion and a Free Quiz on The Infernal Desire Machines of Doctor Hoffman: A Novel by Angela Carter.

The Infernal Desire Machines of Doctor Hoffman is a novel by British author Angela Carter. This novel is a journey through a world in which all of man's desires come true with the help of a machine built by rogue scientist Dr. Hoffman. When Dr. Hoffman turns his machine on and focuses it on the capital city of a comparatively new and unstable country, he is surprised to have his machine met with resistance. A war begins between reality and desire that changes the way man looks at the world. Desiderio, a lost man looking for a master, finds himself an unwitting hero in the war when he denies his own desires and murders the woman he wants more than any other. The Infernal Desire Machines of Doctor Hoffman is a curious look at a world where man is given his every desire and finds it to be less than perfect.

Desiderio is a young man living in the capital city of an unnamed South American country. Desiderio works for the Minister of Determination during a war with Dr. Hoffman, a scientist who has created a machine that is capable of making all of man's desires come true. This machine has so altered reality that many people in the capital cannot tell the difference between what is real and what is not. The Minister of Determination is determined to fight this altered reality by creating his own machines that will tell him what is real and what is not, including a computer that renames all things to make reality even out of imaginary objects.

When Dr. Hoffman sends an ambassador to speak with the Minister about the war, Desiderio finds himself falling in love with the beautiful man's features. Desiderio believes that this man is really a woman named Albertina, a woman who has come to him in his dreams. This man's features haunt Desiderio even as his Minister sends him outside of the city to find and kill Dr. Hoffman. Desiderio's first stop is a seaside village where the mayor has gone missing. There Desiderio meets a peepshow proprietor whom he learns was once Dr. Hoffman's professor at university.

Desiderio is injured and sick as he escapes into the countryside from the police. Desiderio is taken in by a tribe of Indians who live on the river. These Indians take Desiderio and make him a part of their family, even allowing for his engagement to one of their daughters. However, Desiderio learns that they plan to eat him on his wedding day in order to absorb his knowledge. Desiderio runs away and joins a traveling carnival, becoming an assistant to the peepshow proprietor he met previously. During his time with the carnival, Desiderio learns more about Dr. Hoffman, but also has a violent experience with a group of acrobats. As Desiderio recovers from this event, a landslide destroys the carnival and the town where they have stopped, killing the peepshow proprietor and destroying all of Dr. Hoffman's samples.

Desiderio meets up with a Count from Lithuania and his young assistant. Together these three travel all over the country, eventually making their way to the sea where they board a ship for Europe. The ship is hijacked by pirates and these three manage to escape during a storm that leaves them stranded on the coast of Africa. A tribe of Amazonian women captures the three survivors and takes them to their chief. The chief turns out to be a man the Count has been running from for years, a pimp whose prostitute the Count killed. The chief has the Count cooked, but when he attempts to cook his assistant, a young man Desiderio discovers is Albertina in disguise, Desiderio kills the chief and escapes with his love.

Dr. Hoffman takes Desiderio into his lab and shows him the machines that alter reality. The Desiderio is shown the eroto-energy generation room where lovers create energy with their lovemaking. Aware that Dr. Hoffman intends to make Desiderio and Albertina his newest energy producers, Desiderio attempts to escape. Dr. Hoffman is killed and Desiderio is forced to kill Albertina. For this, Desiderio lives the remainder of his life with regret.

More summaries and resources for teaching or studying The Infernal Desire Machines of Doctor Hoffman: A Novel.