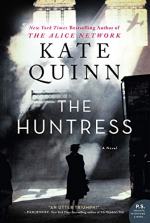 Kate Quinn
This Study Guide consists of approximately 65 pages of chapter summaries, quotes, character analysis, themes, and more - everything you need to sharpen your knowledge of The Huntress.

The Huntress Summary & Study Guide includes comprehensive information and analysis to help you understand the book. This study guide contains the following sections:

This detailed literature summary also contains Quotes and a Free Quiz on The Huntress by Kate Quinn.

The following version of this book was used to complete this guide: Quinn, Kate. The Huntress. William Morrow, 2019.

The novel begins with the account of a woman known as The Huntress, and the atrocities she committed during World War II: killing six innocent Polish children in cold blood.

Opening on one of the character's three protagonists, a teenaged girl named Jordan McBride, who has an affinity for photography. She and her father discuss his new girlfriend, Annaliese, who soon becomes close to the family. She and her daughter Ruth came from Poland during the war and have since made a new life for themselves in America. When Annaliese is over for dinner one night, Jordan catches a photo of her, which depicts the woman in a more ominous fashion than she comes off. Annaliese and Jordan's father soon marry, but on their wedding day, Jordan finds a medal depicting a swastika hidden in the bouquet.

Meanwhile, in Europe, former war correspondent Ian Graham and his partner Tony work to hunt down those who committed war crimes while being associated with the Nazi party during the war. After a new lead surfaces, they begin the chase to find the elusive Huntress, who also murdered Ian's younger brother Sebastian during the war. The hunt leads them to America, or more specifically Boston, and soon after they arrive Ian's wife shows up, a hardened Russian woman named Nina, although they have not seen each other in five years due to the fact that he married her to get her into England.

In Nina's timeline, which is a flashback that takes place during and before the war, the reader first gets an account of Nina's younger years, when she lived on the cold, desolate shores of a large lake in Siberia. One day, her drunkard father tried to drown her, which gave her a fear of water. When she is out hunting in the woods, she comes across a pilot whose plane has crashed, and learns from him that there is an air club in a nearby city. Nina instantly falls in love with the idea of flying, and soon leaves to go to the city to learn how to become a pilot.

Back in the present, Jordan confronts Anneliese about her suspicions of her affiliation with the Nazi party after snooping in her room and finding a mysterious photograph. Anneliese later takes Jordan to pick out her wedding dress, as she has recently become engaged to her boyfriend Garrett, when they get news that Jordan's father has died in a hunting accident.

Tony gets a job at the McBrides' antique shop which is their only lead, and soon begins copying down the store's records in search of more information. Ian and Nina begin interviewing the store's contacts after they discover a list made up of almost entirely fake addresses, however they do not have much luck finding Lorelei Vogt, the Huntress.

A young Nina begins learning to fly at the aviation club, and when Russia goes to war shortly after, makes her way into the 588th regiment, which is made up entirely of women, and is assigned to the night bombing squad as a navigator. She becomes quite good at her job, and falls madly in love with her pilot, Yelena. Their regiment is considered to be such a terror to the Germans, they are soon nicknamed the Night Witches. When the 588th is being honored, Nina gets invited to Moscow, and meets Stalin face to face as he awards her a medal. However, when she returns, she learns that her family has been denounced by the Russian government. Rather than let herself be arrested, she takes her plane and flies as far west as she can. After becoming stranded in the Polish wilderness, she befriends an English soldier named Sebastian.

After some time passes after her father's death, Anneliese helps Jordan realize that marrying Garrett is not what she truly wants. Jordan calls off the engagement, and quickly begins a fling with Tony, whom she can gotten to know as he has worked at the shop. Jordan begins working on a photo essay meant to capture the essence of various professions at work. When she becomes even more suspicious of Anneliese's behavior, she does more investigating and discovers the truth: Anneliese is actually Lorelei Vogt, the Huntress.

Jordan rushes to inform Ian, Tony, and Nina, and all of them race to catch Anneliese, who has fled with Ruth. Nina tells the story of how she ran into Lorelei in Poland, how the Huntress killed Sebastian, and how Nina attacked her before barely escaping with her life, causing Nina to be the one thing Lorelei is truly afraid of. The group manages to track down Lorelei and Ruth just in time, and apprehend her. Ian and Nina take her back to Austria to have her tried, but soon return to Boston. Tony and Jordan continue their relationship, with Jordan working to sell her photos and Tony attending law school in Boston. Ian and Nina have grown to like each other quite a bit, and mutually agree to put off the divorce they had planned.

More summaries and resources for teaching or studying The Huntress.

The Huntress from BookRags. (c)2022 BookRags, Inc. All rights reserved.