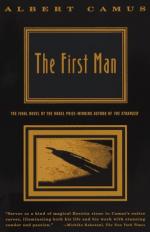 Albert Camus
This Study Guide consists of approximately 33 pages of chapter summaries, quotes, character analysis, themes, and more - everything you need to sharpen your knowledge of The First Man.

This detailed literature summary also contains Topics for Discussion and a Free Quiz on The First Man by Albert Camus.

The First Man by Albert Camus is an autobiographical novel. Present day, forty-year-old Jacques Cormery goes on a search for information about his deceased father, Henri Cormery. In the first section of the novel, Jacques is born in a small village named Solferino in the Algerian countryside in 1913. The next section jumps to 1954, with Jacques as a man. The reader learns that Henri dies before Jacques' first birthday, leaving Lucie, Jacques' partially deaf and mute mother, to raise him. Henri dies in the war in France.

Adult Jacques first explores his father's grave site in a small village in France. Jacques lives in Paris and visits. This visit deeply touches Jacques because he realizes his father died at twenty-nine years old, and he is forty. He realizes that Henri hardly lived life. Jacques travels to Algeria, back to the poor neighborhood where he grew up in Algiers and where Lucie still lives.

Once he is back in the neighborhood, he has long sections of flashbacks to his childhood. In fact, most of the novel is about Jacques' childhood. In the midst of childhood remembrances, Jacques tries to get information out of Lucie and others about Henri. But Lucie cannot remember and the others have no answers.

Child Jacques grows up in extreme poverty and without a father. He lives with Lucie, the grandmother, who is Lucie's mother, his Uncle Etienne, who is fully deaf and partially mute, and his older brother Henri, who is hardly mentioned in the novel. He remembers the good times of growing up, such as playing games, swimming in the beach and causing mischievousness with the other neighborhood boys. The grandmother is the disciplinarian in the family and takes over the mother's role. Any time Jacques does something bad, the grandmother whips him.

Jacques is intelligent and his teacher recognizes this. Jacques passes a special exam to enter lycee, an advanced secondary school in downtown Algiers. He attends and tries to fit in with classmates who have more money than his family does. He becomes a sensitive young man, who observes the people and places around him, and the plight of the Arab-European relationship. He is also wild and vain and gets into trouble at school.

In the midst of his childhood memories, an adult Jacques comforts Lucie when terrorist bombs explode in the street. He also goes to visit Solferino, the village where he was born. However, no one knows of his family, in particular, his father. No one can help him in his search for Henri.

Jacques grows into a sensitive, caring and mature young man by the novel's end. He leaves poverty and succeeds in France. He realizes all of his life experiences both good and bad, including being fatherless, shape him as a person. He is The First Man.

More summaries and resources for teaching or studying The First Man.