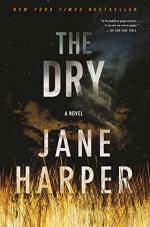 Jane Harper
This Study Guide consists of approximately 38 pages of chapter summaries, quotes, character analysis, themes, and more - everything you need to sharpen your knowledge of The Dry.

The Dry: A Novel Summary & Study Guide includes comprehensive information and analysis to help you understand the book. This study guide contains the following sections:

This detailed literature summary also contains Quotes and a Free Quiz on The Dry: A Novel by Jane Harper.

The following version of this book was used to create this study guide: Harper, Jane. The Dry. Flatiron Books, 2016.

The Dry is a mystery novel set in the fictional farming town of Kiewarra, which is in the Australian state of Victoria. At the beginning of the novel, financial investigator Aaron Falk arrives in Kiewarra, where he lived until he and his father moved to Melbourne when Falk was 16 years old. Falk has returned to Kiewarra to attend the funeral of his old friend Luke Hadler, who apparently killed his wife and son with a shotgun before killing himself. People think that Luke was driven to insanity by the two-year drought that has continued to plague the farming community and ruin its economy. After the funeral, Falk speaks to Luke’s father, Gerry, who recalls the death of Falk and Luke’s friend Ellie. Ellie was found dead in a river at the age of 16. Falk and Luke said they were with each other at the time, but Gerry knows this is not true, and he tells Falk so. Gerry wonders if Luke could have killed Ellie as well as his family. Falk recalls the fact that people suspected him of killing Ellie, as a note with the word “Falk” was found in Ellie’s room after she died. This suspicion is what drove Falk and his father to move away from Kiewarra.

Falk joins an unofficial investigation with local police officer Greg Raco regarding the Hadler killings. Raco is not entirely convinced that Luke was responsible for the deaths, and he enlists Falk’s help because Falk may have personal insights into the situation. In addition, Falk is technically an investigator, as well. Together, they interview farmer Jamie Sullivan, who was the last person to see Luke alive, and they also talk to the local school principal, Scott Whitlam, since Luke’s wife Karen was a bookkeeper at the school. These interviews yield no useful information. Falk becomes suspicious of Mal Deacon, the now elderly father of Ellie Deacon, and Mal’s nephew Grant Dow. Falk learns from Gerry that Mal has been scheming for years to acquire the Hadler land. Falk also dislikes that Grant and Mal seem intent on antagonizing him, and whenever they see Falk, they accuse him of killing Ellie Deacon. Falk also finds a piece of paper in Karen’s belongings with “Grant” written on it, but neither Grant nor Mal confess to having anything to do with the Falk killings. Raco then finds out that Jamie was not at his house at the time of the Hadler killings, but Jamie refuses to say where he was. Raco and Falk then interview the doctor who arrived on the scene of the killings—Dr. Leigh—and Leigh admits that he and Jamie are in a romantic relationship, although they have kept it quiet due to how the community would react. Leigh and Sullivan claim to have been together at the time of the killings.

With Jamie eliminated as a suspect, Falk grows increasingly certain that Mal and Grant have some connection to the killings, but there is no evidence to confirm this. Falk becomes frustrated with the case, until he finds out from a local bartender that Scott Whitlam appears to have a gambling addiction. Through a brief financial investigation, Falk concludes that Scott Whitlam embezzled money from the school in order to pay off gambling debts. Falk correctly deduces that Karen—Luke’s wife and the school’s bookkeeper—must have found out about the embezzlement, and Whitlam must have killed Karen in order to keep the embezzlement a secret. Whitlam must have killed Luke and Billy as the only witnesses to the crime. Falk tells his conclusion to Raco, and they go to arrest Whitlam. However, Whitlam finds out that they are coming for him, so he runs into the woods near the town. Falk and Raco follow him in and manage to subdue him. Then, after Whitlam has been arrested, Falk recalls a place in the woods where Ellie used to hide her belongings. He finds Ellie’s diary there and reads it. The diary reveals that Ellie was planning on running away from Kiewarra in order to escape the physical abuse of her father, Mal Deacon. Ellie wrote that she believed her father would kill her if he found out her plan to run away. Falk then deduces that Mal must have found out and killed Ellie, and that her cousin Grant was complicit in keeping Mal’s murder of Ellie a secret.

More summaries and resources for teaching or studying The Dry: A Novel.

The Dry: A Novel from BookRags. (c)2022 BookRags, Inc. All rights reserved.