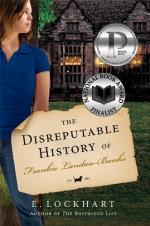 This detailed literature summary also contains Topics for Discussion on The Disreputable History of Frankie Landau-Banks by E. Lockhart.

E. Lockhart's "The Disreputable History of Frankie Laundau Banks" is a young adult novel that follows the adventures of Frances (Frankie) Landau-Banks, a fifteen-year-old sophomore at the prestigious Alabaster Academy in Massachusetts. The summer between her freshman and sophomore year, she fills out in all the right places, and back at school, catches the attention of Matthew Livingston, a senior boy whom she begins dating.

She discovers that Matthew is a member of the Loyal Order of the Basset Hounds, a secret society on campus responsible for lighthearted pranks and mischief. Frankie's own father was a member when he was in school, and Matthew's closest friends -Alpha and Dean- are also members. At the same time, she takes a class about cities and learns about secret societies and their functions.

Frankie comes to envy the bond between Matthew and his fellow Hounds and wants the same kind of bond. She is put off by Alpha, who seems to be at war with her for Matthew's time. When Alpha goes home for a few days, Frankie creates a fake e-mail address for Alpha and uses it to direct the Order of the Basset Hounds to play a series of pranks. Yet, the final prank -the theft and later return of a guppy statue- goes too far, and Alpha is accused of spearheading the stunt.

Frankie confesses what she has done to Matthew, who breaks up with her immediately and goes to the headmaster. Frankie is put on academic probation as is Alpha. Some people shun Frankie while others think thatshe is legendary.