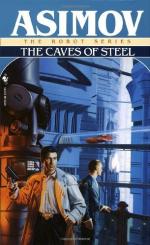 Isaac Asimov
This Study Guide consists of approximately 39 pages of chapter summaries, quotes, character analysis, themes, and more - everything you need to sharpen your knowledge of The Caves of Steel.

The Caves of Steel Summary & Study Guide includes comprehensive information and analysis to help you understand the book. This study guide contains the following sections:

This detailed literature summary also contains Topics for Discussion and a Free Quiz on The Caves of Steel by Isaac Asimov.

The Caves of Steel by Issac Asimov is the story of an unlikely pairing between a New York City police detective, Elijah Baley and Spacer robot, R. Daneel Olivaw. These two must work together to solve the murder of a Spacer, bring the assailant to justice, and hide the investigation from the general public. The Caves of Steel addresses the struggle between people still living on Earth and the Spacers who want to continue colonizing new worlds in the face of overpopulation. Spacers are attempting to move emigration processes along by integrating robots with the City dwellers. This occurrence creates human declassification from jobs because robots are capable of working more efficiently. It is questionable whether humans are capable of being completely succeeded by robots.

The novel is set in a future world, in which 49 Outerworlds have already been colonized by humans emigrated from Earth. The world is vastly overpopulated and depends on a strict cycle of resource supply and demand. Food is no longer eaten naturally from the ground, but processed and fixed genetically. People live inside Cities with conditioned air and controlled amounts of UV radiation. The Cities expand over states with no definable boundaries other than its limits where Spacetown resides and the countryside where almost no one ventures.

Lije first meets Daneel at Spacetown and on their way back to the City they encounter a riot at a shoe store. They stop and try to control the commotion between six women and a store manager over robot employees. The mob of people watching from outside suddenly flood the store and Daneel is forced to take action, threatening them with a blaster and silencing the crowd. The officers return to Lije's apartment where they meet his wife, Jessie, and son, Bentley.

The next day they travel to Spacetown to meet Dr. Fastolfe, a colleague of Dr. Sarton's. He has many theories about emigration and colonization he wants Lije to hear. Lije instead, accuses Daneel of actually being Dr. Sarton, and not a robot at all. Dr. Sarton made Daneel in his exact likeness. The accusation is false and Daneel proves it by breaking his arm in two.

Later back at Headquarters Lije feels defeated and Daneel is busy tabbing people that he recognized at the shoe store, checking their records. Lije is hungry so the partners go to the Section kitchen to discuss the case over food. During their meal a few men are staring intently at them. The officers quickly get up and begin running the strips. Some of the men are ones Daneel identified from the shoe store riot the day before. The officers spend the night in a new apartment for just the two of them.

The next day Lije's friend Dr. Gerrigel comes from Washington D.C. to inspect Daneel. Lije again accuses him of being the murderer, and he proven wrong again when Daneel shows his blaster was never charged during the riot. Lije's wife Jessie enters the office and confesses to being involved in a conspiracy group. She identifies one of Daneel's tabbed men as Francis Clousarr. The officers track down Clousarr and bring him into the office for questioning. Before they can, the Commissioner's assistant R. Sammy is found murdered. Lije is a prime suspect, but he is being framed. Commissioner Enderby suggests Clousarr framed him, but Lije's accuses Enderby himself for the murder of both R. Sammy and Dr. Sarton. Enderby admits to the murder once Lije adds up his facts and finds a shard of Enderby's concave glasses at the murder scene. The case is solved and Lije is a changed man. He now believes that colonization is the only way to save the human race.

More summaries and resources for teaching or studying The Caves of Steel.

The Caves of Steel from BookRags. (c)2022 BookRags, Inc. All rights reserved.