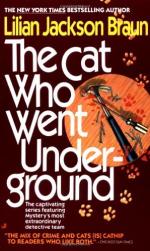 Lilian Jackson Braun
This Study Guide consists of approximately 38 pages of chapter summaries, quotes, character analysis, themes, and more - everything you need to sharpen your knowledge of The Cat Who Went Underground.

The Cat Who Went Underground Summary & Study Guide includes comprehensive information and analysis to help you understand the book. This study guide contains the following sections:

This detailed literature summary also contains Topics for Discussion on The Cat Who Went Underground by Lilian Jackson Braun.

"The Cat Who Went Underground" by Lillian Braun is a murder mystery in which Qwill investigates the disappearances and deaths of five carpenters in Mooseville. Qwill decides to spend the summer in Mooseville at the Klingenschoen cabin. Immediately, things begin to go wrong. He is continually forced to utilize the Glinko Network for repairs on the cabin. When he decides to build an addition, he hires Clem Cottle but the industrious young man disappears. Qwill replaces his carpenter with Iggy who is lazy but Iggy also disappears. After Koko uncovers Iggy's body in the crawl space beneath the cabin, people begin to suspect Qwill of the murder. With Koko's help, Qwill is able to clear his name and uncover the real murderer, Joanna Trupp. "The Cat Who Went Underground" is an interesting and entertaining novel that most readers will find immensely enjoyable.

Qwill decides to spend the summer at the Klingenschoen cabin but he begins having problems with the cabin's condition immediately. When he calls Glinko repair network, Joanna fixes his heater. Qwill attends a party on the dunes and discusses his desire to build an addition to the cabin, and his neighbors warn him that he will have to hire an underground builder who is unreliable. Qwill has several more repair problems for which he hires Glinko and he begins to suspect the Glinko network of shady business practices. When he mentions his desire for an addition to Nick and Lori Bamba, they recommend Clem Cottle to do the work and so Qwill hires the young man. Clem begins work on Qwill's addition and Qwill is very pleased with the industrious and honest carpenter. Qwill judges the Fourth of July parade in Mooseville and is puzzled by Clem's absence. This puzzlement increases when Clem does not show up for work and Qwill doubts the honesty of Clem's fiance when she claims that he is out of town. Qwill attends the Wimsey family reunion and interviews Emma Wimsey. After Qwill finds Clem's empty truck, he advises Maryellen to report the disappearance to the sheriff.

Qwill meets with Roger who invites Qwill to join him on an investigation regarding an UFO landing on Three Trees Island and tells Roger that he is suspicious of the string of carpenters disappearing or dying. At the Black Bear Cafe, Gary recommends Iggy when Qwill asks about a carpenter to replace Clem working on the addition. Qwill hires Iggy but becomes annoyed quickly due to Iggy's laxity in his work. Qwill attends a meeting with Mrs. Ascott, the clairvoyant, and is disturbed by a message from his dead childhood sweetheart, Joy, who warns him to protect Koko and Yum Yum and mentions an excavation. Qwill visits Emma Wimsey at the nursing home and she gives him a bag of her collectibles because her family does not care about it.

Qwill boats to Three Tree Island with Bushy and Roger but the three men get stranded on the island when a tornado lands and floods the area. They are rescued and on the way to the hospital, Qwill sees that the tornado destroyed his new addition. When he returns home, Qwill is too lazy to search for Iggy whose truck is still parked in the driveway although there is no sign of the carpenter. He finally follows Koko into the crawl space and finds Iggy's body. He is upset when the police seem to suspect him. When he learns that Emma Wimsey died, he goes through her bag of belongings and reads several stories that she had written. After verifying the accuracy of one of these stories with Cecil Huggins, he learns that Joanna is Emma's granddaughter and was sexually molested by her father. Nick stays the night with Qwill to protect him when local troublemakers begin plotting against Qwill because they believe that he is responsible for Iggy's death. When Nick follows Koko into the crawl space, he finds a list of the five dead or missing carpenters along with the date that they were murdered. After Nick leaves, Qwill has Joanna come by and he tricks her into telling him that Louise killed those men because her father was a carpenter and a bad man. Back in Pickax, Qwill explains to Arch Riker and Amanda that Joanna created an alter-ego to kill carpenters because she believed they were all bad men since her father was. Qwill praises Koko's genius in providing Qwill with the clues to solve the deaths of the five carpenters.

More summaries and resources for teaching or studying The Cat Who Went Underground.

The Cat Who Went Underground from BookRags. (c)2022 BookRags, Inc. All rights reserved.