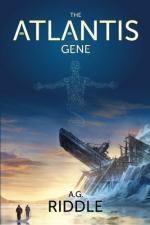 A.G. Riddle
This Study Guide consists of approximately 130 pages of chapter summaries, quotes, character analysis, themes, and more - everything you need to sharpen your knowledge of The Atlantis Gene.

This detailed literature summary also contains Quotes and a Free Quiz on The Atlantis Gene by A.G. Riddle.

The Atlantis Gene by A.G. Riddle is a thriller that spans the globe. The question of how humans have evolved is looked at in great detail. David Vale and Dr. Kate Warner race to save the world from genocide. Vale is an intelligence agent, and Dr. Warner is a geneticist. Together they must discover why two autistic children, whom Dr. Warner has been treating, have been kidnapped and why Vale’s intelligence agency is being taken over by outside sources.

They discover that a group called the Immari, who have been around for two thousand years, is attempting to isolate a gene called the Atlantis Gene. They believe this gene is the next step in human evolution. They have taken the two children because Dr. Warner has discovered how to activate this gene and the Immari want to know how. They need to know because an advanced race, the Atlanteans, are lying dormant under the ice of Antarctica and the Immari believe they are a threat to the human race.

Vale and Dr. Warner travel the world to piece together the plans of the Immari and try to unravel the elaborate plan they have to protect the human race. Together they must fight an ancient evil that has taken part in acts of terror throughout history, including the Nazi regime and the 9/11 attacks. The organization stops at nothing to forward their cause. The two must piece together the mystery of the origins of the human race and race against time to stop a power organization with unlimited resources as they attempt to force the next stage of human evolution at any cost –even killing most of the world’s population.

More summaries and resources for teaching or studying The Atlantis Gene.