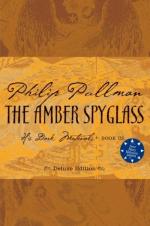 Philip Pullman
This Study Guide consists of approximately 76 pages of chapter summaries, quotes, character analysis, themes, and more - everything you need to sharpen your knowledge of The Amber Spyglass.

This detailed literature summary also contains Topics for Discussion and a Free Quiz on The Amber Spyglass by Philip Pullman.

The Amber Spyglass is the third book in the His Dark Materials trilogy, which tells the story of Lyra of Jordan College in another world's version of Oxford, her friend Will from our world, and Lord Asriel's revolt against the Kingdom of Heaven.

The Amber Spyglass begins with the reappearance of Lyra, who has been kidnapped by her mother, Mrs. Coulter, who keeps her daughter sedated. Lyra dreams of her friend Roger, whose death she feels she caused. She promises that they will free him from the World of the Dead. Lyra's friend Will, the bearer of the subtle knife, searches for her despite the urgings of two angels, Balthamos and Baruch, that he should go immediately to Lord Asriel and offer his knife and his services in Asriel's war against the Authority. On his journey to save Lyra, Will meets the bear-king Iorek Byrnison, and they join forces.

Dr. Mary Malone is also traveling through different worlds, after communicating with Shadows in her lab in our Oxford that directs her to destroy the equipment and "play the serpent." She finds the world of the Mulefa, a people who travel on wheels, and discovers that Dust is rapidly leaking out of the world. Mary begins investigating the cause of the problem. However, she does not know she is being tracked by Father Gomez, an agent of the Church who is on a secret assignment to kill Lyra, as the Church now knows Lyra is destined to be the new Eve and must be killed to save all creatures from sin. Lord Asriel strengthens his forces and sends out Gallivespians to spy both on the church and to find Lyra and Will.

Will finds and rescues Lyra just as the opposing armies find her, and he rescues her from the cave during an attack. They are followed by two Gallivespians, the Chevalier Tialys and the Lady Salmakia. However, he shatters the knife when he thinks he sees his mother's face when he is looking at Mrs. Coulter, and cannot cut through to make an escape. Iorek is able to repair the knife but warns that it may be more dangerous than they know.

Mrs. Coulter is captured by Lord Asriel's forces but steals a craft and returns to the Church. Father McPhail, the president of the Consistorial Court and the man who sent Father Gomez out to kill Lyra, does not trust her. He steals a lock of hair of Lyra's hair from Mrs. Coulter to use in a bomb that has been designed specifically to kill the girl. Mrs. Coulter tries to disable the bomb, but is unsuccessful. She is picked up once again by Lord Asriel's forces, this time by Asriel himself.

Lyra and Will find their way to the world of the dead, but must leave their daemons behind. They find Roger, Lee Scoresby, and Will's father. Lee saves Lyra from being killed by the bomb by directing Will to remove the matching lock of hair to another world, but the explosion opens an abyss in the world of the dead. Will and Lyra, accompanied by the dying Gallivespians, are able to lead the dead out into the world of the Mulefa, and the souls are free to join the universe. Lee and John Parry stay to fight Specters in the final battle, and Metatron, the Lord Reagent of Heaven, plans to take Will and Lyra's daemons so that the children will have no choice but to follow him. The Authority is revealed to be an ancient and imprisoned angel. Lord Asriel and Mrs. Coulter together destroy Metatron.

But Dust is still escaping, the children's daemons are staying distant. Lyra loses the ability to use the alethiometer. Mary Malone tells Will and Lyra a story about how she left the church and how her life changed, and Will and Lyra realize they are in love with each other. Balthamos the angel reappears and leads Father Gomez to his death just as he is stalking the children. Dust returns to normal.

Will and Lyra learn that people cannot live long in a world other than their own and that every time the knife makes a cut, another Specter comes out of the Abyss. All of the open windows must be closed, except for the one that lets souls out from the world of the dead. Will and Lyra must return to their own worlds, teach people to do good, and thereby will keep the Specters in check. They part forever in the Botanic Garden in Will's Oxford, and Will destroys the knife by thinking of Lyra. The story ends with Lyra deciding that she will go to school, study the alethiometer, and work to establish the Republic of Heaven in her own world.

More summaries and resources for teaching or studying The Amber Spyglass.