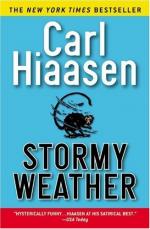 Carl Hiaasen
This Study Guide consists of approximately 54 pages of chapter summaries, quotes, character analysis, themes, and more - everything you need to sharpen your knowledge of Stormy Weather.

This detailed literature summary also contains Topics for Discussion and a Free Quiz on Stormy Weather by Carl Hiaasen.

Stormy Weather is a novel about the aftermath of a destructive hurricane that struck Southern Florida. The novel begins with many diverse characters that appear to be completely unconnected. Several characters arrive in South Florida to take advantage of the chaos after the storm to defraud victims, while others are caught in the momentum of the chaos itself, innocent as the victims. As the novel progresses, the separate categories of characters make connections to each other that create a symbolic link between the plot and the destruction of the hurricane. Stormy Weather is a novel as chaotic as the storm it depicts, creating a highly entertaining work of fiction.

Bonnie and Max Lamb are on their honeymoon when the hurricane hits. Max is excited by the storm and insists on traveling to Miami to see it firsthand. Bonnie is outraged by Max's behavior when it becomes clear his only desire in being in the ravaged area is to videotape it, and purposely loses him in the chaos of destruction. It is not until later that Bonnie realizes Max is really lost, abandoning her to the dangerous elements of the now lawless city. A kind stranger finds Bonnie wandering the streets and offers to help her.

Augustine Herrera inherited a small wildlife import business from his uncle shortly before the hurricane. After the storm, Augustine discovers that all the animals have escaped their cages and wandered into the surrounding neighborhoods. Augustine goes in search of the animals and finds instead Bonnie Lamb, wandering the streets in search of her husband. Augustine takes her home with him. Once there, Bonnie learns from a message on her answering machine back in New York that her husband has been kidnapped. Augustine helps Bonnie get in touch with the FBI. However, the search for Max Lamb is not a priority because of the storm and because Max's messages on the machine give the impression of a man more concerned with his career than about his own well being.

Edie Marsh is an opportunist who decides to use the hurricane as a means to make a quick buck. Edie teams up with Snapper, a criminal she has done business with in the past, to scam homeowners out of their insurance money. Edie and Snapper attempt to convince one homeowner that Edie has fallen under debris from the homeowner's house, but the homeowner quickly sees through their scam. The homeowner, Tony Torres, has a scam of his own he needs help with. Tony convinces Edie and Snapper to help him defraud the insurance company by having Edie pose as Tony's estranged wife, Neria.

The insurance scam appears to be going perfectly until a man shows up and disappears with Tony. Snapper, too, leaves, joining a friend in a roofing scheme. Edie is left alone in a nearly demolished home. When the insurance man shows up, Edie realizes this is the perfect opportunity to take the entire payoff herself rather than share it with anyone. Edie seduces the insurance man and convinces him to go along with the fraud. However, Snapper soon tires of the roofing scam and returns to Edie, forcing her to cut him in on the deal.

Augustine and Bonnie get word from Max's kidnapper that he wants to meet Bonnie. They go to the meeting with a state trooper who claims to be a friend of the kidnapper's. They not only rescue Max, but bring in the kidnapper as well. The state trooper tells the kidnapper, Skink, that the trooper's lover has been injured by a criminal she pulled over in a stolen car. Skink decides to go after the criminal as a favor for his friend. The criminal turns out to be none other than Snapper.

Augustine and Bonnie go with Skink in his hunt while Max returns to his job in New York. Augustine and Bonnie have grown close and Bonnie is having a hard time deciding if she should return to her husband or not. While Bonnie is attempting to make this decision, she finds herself in the middle of her own kidnapping with Skink. The kidnapping ends with Skink and Augustine turning the tables on Snapper, taking him into the wilds of the Keys as their hostage. It is during this time that Bonnie decides to remain with Augustine instead of returning to Max.