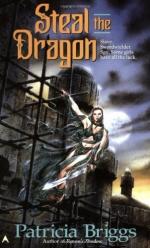 Patricia Briggs
This Study Guide consists of approximately 30 pages of chapter summaries, quotes, character analysis, themes, and more - everything you need to sharpen your knowledge of Steal the Dragon.

This detailed literature summary also contains Topics for Discussion on Steal the Dragon by Patricia Briggs.

Rialla is a young girl taken as a slave. Years later, after her escape, she finds an opportunity to end slavery in the land.

Rialla is a natural empath, so her father teaches her how to use her ability with horses. When slavers attack the entire group, they torture and kill almost everyone, keeping Rialla for a slave. Rialla loses almost all of her empathy. She is trained as a dancer, but she runs away and goes to the nearby city of Sianim. Rialla makes her home in Sianim, city of mercenaries and spies, and gets a job as a horse trainer.

Years later, there is a possible alliance between Darran and the nearby country of Reth. This alliance will probably end slavery in Darran. The Spymaster asks Rialla if she will return to Darran as a spy, posing as a slave. Rialla agrees, going dressed as the slave of Laeth, who is her best friend. They go to Darran, and while they are there, someone tries to poison Lord Karsten, Laeth's brother. Only the talents of the healer, Tris, save his life. Tris uses medicine and healing plants to hide the fact that he uses magic to heal people. While Rialla is at Lord Karsten's estate, she bumps into her old master, who turns out to be Lord Winterseine, Laeth's uncle.

On the night of Karsten's birthday party, a huge, nasty swamp monster materializes in the ballroom. The monster is distracted by Rialla's empathy, and attacks her. Rialla fights the monster, giving it all the negative emotions she can find. The monster dies, but during the distraction, someone stabs Karsten to death. All suspicion points at Laeth, because Karsten has married Marri, the woman Laeth loves. The unconscious Rialla is brought to Tris's house, because she has a huge wound on her leg from the fight. Her powers seem stronger than ever, because of the fight with the monster. When Marri shows up, and tells them that Laeth is to be executed the next day, they know they have to act. Tris magically heals Rialla's leg, and they go to rescue Laeth. Tris gets him out while Rialla steals their horses, and then she leads their pursuers on a wild goose chase.

Laeth and Marri make it to Sianim, but Rialla is returned to Winterseine, her old master. Beforehand, Tris telepathically bonds her to him, using a ceremony involving the exchange of blood. Rialla does not realize that this makes them married in the eyes of the sylvans, or tree-folk, of which group Tris is a member. Rialla and Tris find Winterseine's spellbook, and the dagger used to murder Karsten. They steal these and make their way to Sianim. Rialla gets caught, but uses her empathy to drive Winterseine insane. Rialla presents the evidence for Winterseine's guilt, and the official who receives it tells her he will try to help the alliance that will end slavery.

More summaries and resources for teaching or studying Steal the Dragon.