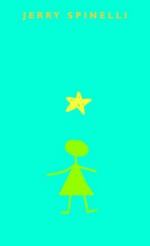 Jerry Spinelli
This Study Guide consists of approximately 40 pages of chapter summaries, quotes, character analysis, themes, and more - everything you need to sharpen your knowledge of Stargirl.

This detailed literature summary also contains Topics for Discussion and a Free Quiz on Stargirl by Jerry Spinelli.

It was the first day of school at Mica High School and the halls are buzzing about the new girl who calls herself Stargirl Caraway. To say she is different is an understatement.

Her clothes are different as are her mannerisms, and she has a pet rat she carries around in a bag that has a picture of a Sunflower on it. Leo Borlock learns about Stargirl from his best friend Kevin Quinlan. During lunch, while Leo and Kevin are sitting together, Stargirl pulls out a Ukulele and begins to strum on it and dance around the lunchroom. Day after day she does this focusing on one particular person to whom she sings Happy Birthday. It is unclear how she knows that someone has a birthday. Hillari Kimble says she thinks Stargirl is a "plant," someone put in the school by the administration to get students interested in school, to create school spirit.

Leo and Kevin (best friends) are fascinated with this new girl. They decide to interview her for the Hot Seat, a local cable television program they have launched. Still, Leo balks at the idea sensing it might not be the right thing to do. As days go bye, Leo and Kevin get into a disagreement about putting Stargirl on Hot Seat. There are some clear indications that Leo just might be falling in love with her.

Many of the teens in the neighborhood gather occasionally at A.H. (Archibald Hapwood) Brubaker's house, a place where they learn from "Archie," who is a retired college teacher/paleontologist; a friend, sounding board, and philosopher for many of the teens who gather there. Archie has a favorite specimen, the skull of a Paleocene rodent. He also has an old Tattered Saguaro Cactus on his property which seems to be standing watch over them all.

While most people do not want to associate with this odd girl, she does make friends with a ninth grader named Dori Dilson. Dori and a few of the unpopular kids sit with Stargirl in the lunchroom. Others are intrigued with Stargirl and watch for and expect her weird but entertaining behavior. They don't get too close or invite her into their group of friends .

During a school football game, Stargirl takes it upon herself to be an unofficial cheerleader. She cheers and flips with grace and enthusiasm. Her antics get her so much attention she is invited to become a cheerleader. At that point her popularity becomes the talk of the school. Stargirl is noticed and accepted by the "in-crowd," and things seem to be going well for her. Leo continues to be intrigued by her, and it looks like love. .

As Leo is getting to know Stargirl he discovers that she does random acts of kindness by scouting newspapers and reading bulletin boards, where she discovers birthdays and other key events that people are celebrating, or mourning, which she then finds some considerate way to acknowledge.

Despite Stargirl's kindness and talents, eventually her popularity "goes south." Her first big mistake is to sing happy birthday on Hillari's birthday, even when asked by Hillari not to do so. When she finally appears on Hot Seat, the students selected to ask the interview questions, led by Hillari, get angry and hostile toward her. But Stargirl maintains her cool and even shines. Still, there are rumblings of discontent in school with Stargirl. Stargirl then makes a more fatal mistake: she begins to cheer for both teams at the game and even runs to the aid of an injured player on the visiting team. When Mica's team begins losing , Stargirl is the blame. Along with that she is overheard saying her own words to the Pledge of Allegiance and is considered un-American.

While all this is happening Leo and Stargirl continue falling in love. Although they are close outside of school few know they are a couple. When Stargirl puts a note on the school bulletin board proclaiming her love for Leo, things start to fall apart for him. Leo begins to be ostracized along with Stargirl...guilt by association, and instead of being proud of his love for her, he continues to try to hide his connection to her .

Leo begs Stargirl to "become normal." Almost overnight, she changes. She comes to school looking like the other girls and calling herself Susan (which is her actual given name.) Her one and only true friend Dori Dilson is upset with her for changing, but Leo thinks it's great, at first. They all soon discover the students still don't accept Stargirl completely.

They know she is different. She has been labeled different. She can't escape the label. Near the end of the novel we get great insight into her feelings about life in a speech she gives at a contest in Phoenix. In the speech she talks about the complexities of life, what we should notice, what we hold dear, and what we might see and hear if we pay attention. She called her speech "I Might Have Heard a Moa."

When Stargirl decides to form a singing group Leo and Kevin believe she is getting "goofy" again. It is a big joke at school. Stargirl and Dori, the only two in the group, do a duet in the courtyard. And, even though they are good, the others make fun of them.

The night of the Ocotillo Ball arrives, and Leo has not invited Stargirl to go with him. He can't resist watching the Ball from a distance. Stargirl did go to the Ball however, and students and parents were enchanted again. Ordinary boys asked her to dance. Others joined in and did the bunny hop, but Stargirl disappeared that night, forever. Later that summer Leo tried to find Stargirl, but found only the For Sale sign in front of her house.

At the end of this novel, it is fifteen years later and Leo goes to see Archie. Leo asks Archie if he will ever see Stargirl again. Archie gives him cryptic answers. "Star people are rare. You'll be lucky to meet another." He goes on to say that, "...every once in a while someone comes along who is a little more primitive than the rest of us, a little closer to our beginnings, a little more in touch with the stuff we're made of."

Next Archie takes Leo to Stargirl's "workroom" which was an old tool shed on Archie's property. Inside they find maps and photo albums containing pictures and stories about ordinary citizens and students at Mica High. Then, later, on his last visit with Archie (as Archie seems to be aware of his impending death), Archie asks Leo to take him out into the foothills where he picks out a hole in a rock in which he places his prize Paleocene rodent along with a slip of paper. The reader is not told what is on the slip of paper.

In the conclusion of the novel (written like an addendum) entitled "More Than Stars" the reader is given an update on many of the characters. Kevin is an insurance salesman. No one knows what happened to Wayne Parr. The high school has a new club called the Sunflowers and to join you have to promise to do something nice for someone every day.

When Leo visits Mica he always drives by Stargirl's house. When he reads the newspaper he looks for the fillers, the articles about random acts of kindness. He thinks of Stargirl often, of her acts of kindness. Then out of the blue, just one day before his birthday, he received a gift-wrapped package in the mail with a porcupine necktie in it, and he knows she is still out there.