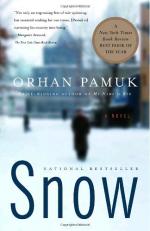 This detailed literature summary also contains Topics for Discussion and a Free Quiz on Snow by Orhan Pamuk.

Snow by Orhan Pamuk is a love story set in the volatility of today's Turkey with its clashes between tradition and change and religion and modern atheists—all set in the beautiful, but sometimes treacherous beauty of a border city in the midst of a winter snowstorm.

Ka is an exiled poet, who has returned to Turkey upon the death of his mother. After attending her funeral in Istanbul, Ka travels to the northern city of Kars to visit someone he knew in college and admired from afar, learning that she is recently divorced from her husband. Ka uses the excuse of being a journalist sent to the city to write about the recent suicides of young girls and the upcoming mayoral election.

When Ka sees Ipek again, he is overcome by her beauty, which is far greater than he had remembered. Ka is overwhelmed with his feelings that Ipek is the answer to his dreams, and so Ka pursues her relentlessly during his brief stay in Kars. Staying at the same hotel that is owned by Ipek's father and where they reside, makes it easy for Ka to see her often. He is invited nightly for dinner with the family and so gets to love her the more he sees her.

Ka is immediately caught up in the events of the town as he interviews people for his ostensible story: the mayoral candidate, who is Ipek's ex-husband Muhtar and sometime acquaintance of Ka's; the families of the suicide victims; the assistant police chief; even the leader of the theatrical troupe, Sunay Zaim, who Ka knew slightly from years ago and is in town for a performance at the National Theater.

Ka also meets some of the religious high school students, who are interested in him because he is talking to the girls who didn't want to bare their heads. Ka is introduced to some of their leaders, Necip and Fazil, who happen to be ardent admirers of Ipek's sister Radife, who is madly in love with and the mistress of a renowned Islamic terrorist named Blue.

During his brief stay in Kars, Ka manages to fall in love with Ipek and have his love reciprocated, both verbally and physically, resulting in the most happiness that he has ever known. His happiness is overshadowed by doubts that assail him every step of the way. A profound effect of this happiness is his ability to write the best poetry he has ever written - nineteen poems in a few short days that seem to come from another being.

Another manifestation of his stay is his struggle with his belief in God. He has at times thought of himself as an atheist, but during his stay, he visits the local sheik and declares his love for God. The local Islamists question the validity of his claims and tell him he is a poseur just trying to ingratiate himself.

Finally, there is a coup led by Sunay Zaim with help from a man, who was colonel during his military days. Against bloodshed, religious fanatics, theatrical farces and love triangles and betrayals, a blizzard keeps all the participants in the city watching the events unfolding to a surprising end. A friend of Ka's, Orhan Bey, is a recorder of these events after the death of Ka. In the end, Ka turns out not to be the person that Orhan or anyone else thought he was, except Blue.