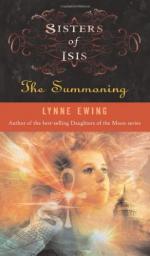 Lynne Ewing
This Study Guide consists of approximately 27 pages of chapter summaries, quotes, character analysis, themes, and more - everything you need to sharpen your knowledge of Sisters of Isis.

Washington, D.C. is the city where the book's characters live and the setting for the book.

Lincoln High School is the school attended by Sudi, Sara and a few of the other characters.

The Book of Thoth

The Book of Thoth is a series of papyrus scrools containing the spells and incantations that give Sudi, Meri and Dalila their powers.

Each of the three girls receive a brass wand in the shape of a snake, decorated with Egyptian symbols that begin to move when a demon approaches.

The Sacred Eye of Horus is an Egyptian symbol of the god Horus. Each of the three girls has the symbol on her head as a birthmark.

More summaries and resources for teaching or studying Sisters of Isis: The Summoning.

Sisters of Isis: The Summoning from BookRags. (c)2022 BookRags, Inc. All rights reserved.