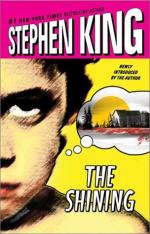 The Shining Summary & Study Guide includes comprehensive information and analysis to help you understand the book. This study guide contains the following sections:

This detailed literature summary also contains Quotes and a Free Quiz on The Shining by Stephen King.

A boy’s special perception and a possessed hotel interact with deadly results in the novel “The Shining” by Stephen King. Five-year-old Danny Torrence and his parents, Jack and Wendy, are spending the winter at a resort high in the Colorado mountains. It is Jack’s last chance at a job to get his writing and teaching career back on track. Instead of concentrating on his writing, Jack is distracted by the history of the hotel which includes questionable management, suicide, and murder. As Jack becomes more and more obsessed with the hotel, he becomes its possession. He even tries to follow through with its demand to kill his wife and son. It is the hotel’s one weak spot, its aging boiler, that allows Danny and his mother, along with his friend Hallorann, to get out of the hotel without becoming its victims.

As long as he and his parents can remember, Danny has known things. His parents can’t explain his extra sensory perception, and a doctor tries to write it off as the deductive reasoning of an extremely creative child. Danny, however, knows it is Tony, a figment of Danny’s older self, who gives him his strange knowledge. Tony has shown Danny scenes of what will happen to them at the hotel. Though he knows he should warn his parents not to go, Danny also knows this is his father’s last chance to get his career back.

As the family passes the first months at the hotel, Wendy notices that her husband’s drinking symptoms begin to come back even though there is nothing to drink. Then Danny is choked by what he describes as a dead woman in the bathtub of Room 217. Jack finds nothing in the room on first glance. Wendy is determined that it was Jack who hurt the boy again, as he did several years prior in a drunken rage. Their history of bad times in their marriage and bad experiences with their parents cause Jack and Wendy to build cases against each other, pushing them further and further apart.

Without the support of his family, Jack falls fully prey to the hotel. This building is coming to life around the family with noises and momentoes of a masked ball – up around them. Danny has wound a clock in the ballroom which seems to have set into motion a destructive sequence of events set to end on December 2 with the “redrum” he has been dreading. He calls out for Hallorann who comes to the rescue of the young boy and his mother all the way from Florida.

The Shining from BookRags. (c)2022 BookRags, Inc. All rights reserved.