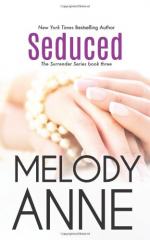 Melody Anne
This Study Guide consists of approximately 39 pages of chapter summaries, quotes, character analysis, themes, and more - everything you need to sharpen your knowledge of Seduced (Book 3 of the Surrender Series).

This detailed literature summary also contains Quotes and a Free Quiz on Seduced (Book 3 of the Surrender Series) by Melody Anne.

Seduced, a novel by Melody Anne, traces the love stories of three different couples. Romance abounds as Rafe tries to win back the love of Ari, the woman he has decided that he cannot live without. Lia and Shane find a new spark in their love for one another when they are isolated on an uninhabited island. Rachel and Ian believe their love will be only a week of fun, but an unexpected malfunction could bind them together for life.

Rafe Palazzo returns from Paraguay knowing that Ari Harlowe is the woman for him. Rafe has learned what real love is from getting to know a couple in Paraguay. The man kills himself, no longer willing to live without his wife, when she dies in childbirth. Rafe wines, dines, and romances Ari. However, it is not until he shares his experiences in Paraguay with her that Ari realizes that he is a changed man. Soon after, she accepts his proposal of marriage.

Although Lia Palazzo had pursued her brother’s best friend Shane Grayson for years, she’s trying to avoid him now. She feels betrayed by Shane because he told Rafe the two slept together. Isolated on an island after Shane’s yacht is wrecked in a storm, the two reconnect. Lia finally realizes Shane did not tell Rafe about their affair to hurt her. He told him because Rafe is Shane's only family. Once they are back in the real world, Lia makes Shane visit his mother in the psychiatric hospital where she is serving a sentence for killing Shane’s father. Even though Shane is finally able to make peace with his mother, there are more problems for Shane and Lia as she gets angry with him when he tells her he is still serving in the armed forces.

The final couple in the story embarks on a fling that lasts a week. They want to have a good time with one another before they move on to more serious ventures. Ian is to become king when he returns to his country. Rachel will be taking a job in Italy’s American embassy, hoping to prove herself to her family. Several weeks later, Rachel realizes that she is pregnant. Ian, who has had her followed, shows up at her doorstep telling her that she must marry him as she is carrying the heir to the throne.

The novel culminates on the day of Ari and Rafe’s wedding. Rachel, who is to be one of the bridesmaids, is missing. Her hotel room is searched and a note is found from Ian. He has arranged for Rachel to be kidnapped and taken back to his country. Rafe is angry as he had believed the man was his friend. Ari and Rafe decide to postpone their wedding until Rachel is returned to the family.

More summaries and resources for teaching or studying Seduced (Book 3 of the Surrender Series).